Review: When Buffalo Stood Atop the Sports World (2020) 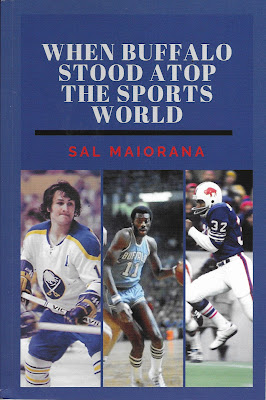 Some of the Buffalo television stations seem to be having a contest about who can be the most relentlessly optimistic about the local sports scene in 2022. It's understandable to some extent, as station executives usually think it's good for ratings. Still, it's not a good look for journalists to be cast as cheerleaders.

You'd probably guess by that coverage that Western New York has never had it so good when it comes to its sports teams. And you'd be wrong.

Life was even better in the mid-1970s around here. All of the major local sports teams found themselves in first place during a week in 1974. Even better, there were three of them - Bills, Sabres, and Braves.

And even better, they all features players who were arguably the most exciting players in their respective sports. Take a bow, O.J. Simpson, Gil Perreault and Bob McAdoo.

There's a good chance that many of you weren't around to see that era, or at least old enough to appreciate it. Luckily, Sal Maiorana is here to help you. The Rochester sportswriter, who has a ton of books to his credit, has come up with "When Buffalo Stood Atop the Sports World."

It's probably fair to say that Maiorana has been waiting his entire life to write this book. He attended Buffalo State in the years in question (1973 to 1976), and thus had a good seat for all of the action. What's more, he's been close by for most of the years since then. Not only has he been able to follow the fortunes of the local teams, he's had the chance to write about them. One of the jobs of a sports reporter is to grab heroes of a previous era, and ask them about the good times of the past. It's often one of the rare pleasures of the job. The interview subjects usually love to talk about such triumphs, and the readers like to relive them.

Sal reviews the Bills during the Simpson years, when O.J. was the biggest star in the sports universe. He set the all-time rushing yardage record in 1973, led the team to the playoffs in 1974, and had his best all-around season in 1975. The Braves follow the same arc in a sense. McAdoo emerged as a superstar in the fall of 1973 once he had a new cast around him. His team made the playoffs for three straight seasons, their only postseason appearances in their eight-year history. The Sabres followed a slightly different path. But the 1973-74 season was still eventful and interesting for the wrong reasons, but the team bounced back and reached the Stanley Cup finals in 1975. The 1975-76 season was another good one, although in hindsight there weren't going to be any happy endings around with the start of the Montreal Canadiens' dynasty arriving at the same time.

Maiorana went into his own scrapbooks for a lot of information. But he also mined some other research materials to go into this story. (I'm proud to say a book I did on the Sabres was included here.) I'd like to think I know something about the subject here, having written extensively on these areas. Yet Sal came up with some facts that I didn't know about - which makes it more fun to read.

This is a self-published book, and it's not particularly slick as a result. There are only a handful of photos, for example. But I can't say I noticed more than a couple of typos along the way, which beats the usual standard for this publishing technique. A little editing could have been done on the stories of individual games without much pain, but that's a relatively minor complaint.

"When Buffalo Stood Atop the Sports World" covers the necessary areas of a sports history lesson in an entertaining way. Can't ask for more than that. I know a few people that should read it.

Labels: Review: When Buffalo Stood Atop the Sports World (2020)