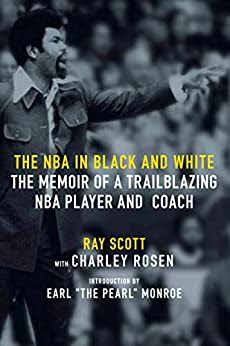 By Ray Scott with Charley Rosen

It's time for a history lesson, and Ray Scott is your teacher.

Your textbook is his autobiography, "The NBA in Black and White."

Scott is remembered by semi-old-timers for playing 11 seasons of pro basketball in the NBA and ABA. But that's only part of the story, albeit the portion that will attract the attention of most readers.

Scott was an outstanding high school player in the city of Philadelphia back in the 1950s. He couldn't stop one of his contemporaries in those days, Wilt Chamberlain, from winning championships. Then again, no one could. Ray moved on to college, and eventually turned up at the University of Portland on the West Coast.

But that didn't last long, thanks to some academic issues, and Scott went back to Philadelphia to live. He turned up in the Eastern League, which was the closest thing that the NBA had to a formal minor league in those days. Even if Ray missed some time in college, he certainly got an education in the small gyms of Pennsylvania.

And here's the remarkable part of his career: he gained enough attention from pro scouts to be the No. 4 overall selection in the NBA Draft by the Detroit Pistons. Really, No. 4? Obviously, foreign players turn up high in the NBA draft now, but those guys usually have played for club teams in Europe. It's a different system of development there. Scott must have been really, really good to catch the eye of Earl Lloyd, a pioneer in African Americans in pro basketball and certainly one of the most interesting men to ever work in that business. (Check out some of his interviews on YouTube some day.)

Scott averaged double-digits in points in his first eight seasons in the NBA, and was around that number in rebounds most of the time as well. In other words, Ray was a consistent, good player.  He was dealt to the Baltimore Bullets in a complicated, three-way transaction in 1967. Then he jumped to Virginia of the ABA in 1970 for a couple of seasons. Knee problems eventually ended his career.

Then career number two started. Scott was hired as an assistant coach of the Pistons by Lloyd, and then replaced Lloyd as head coach. Ray is best remembered as the NBA's Coach of the Year in 1973-74, when the usually mediocre Pistons won 52 games. But Detroit couldn't stay at that level, and Scott was let go after a year and a half. He moved on to coach at Eastern Michigan University for a while, and then went into the insurance business (career number three) for a long, successful run.

While Scott was around as the NBA took baby steps toward becoming the force we know today back in that era, his story is more about the fact that he was a black basketball player in that era. America was trying to figure out the issue of civil rights in those years. This is someone who as a 12-year-old, had take "safe" roads to drive any distance into the South. That changed, thanks in large part to the Interstate Highway System. Scott's method of travel improved a bit when he reached the pros. But even there, he had to figure out what restaurants and clubs would allow him to walk in the front door when he visited those places on road trips.

Scott, who was assisted by Charley Rose in the book, tells an interesting story here about the time when the Pistons acquired Dave DeBusschere. The team simply gave him No. 22 upon reporting, since he had worn that number in other stops in his sports career. But that had been Scott's number, and he was surprised to discover one day that a uniform with No. 31 was in his locker. The best that could be said is that the Pistons were thoughtless in the matter, and Scott was left wondering what would have been done if the names in the story had been reversed.

Scott's coaching career also is interesting in hindsight. He was the first African American to win the NBA's Coach of the Year Award. Right after that, the Pistons' ownership changed hands, and Scott's relationship with management changed. The front office forced the trade of Dave Bing, and soon after that assistant coach Herb Brown sounds like he tried to work behind the scenes to move up to the head coaching job. That eventually happened; OK, the team has an owner for a reason. But the man who was deemed the NBA's best coach at one point never got a second shot at an NBA job. It was a time when white coaches seemed to be recycled like plastic milk containers are now.

The small consolation for some of the slights was that Scott did have some good times along the way. You'd expect him to establish bonds with players like Chamberlain and Bill Russell, since there was more that brought them together than separated them. But Scott also was on a first-name basis with people like Muhammad Ali and Aretha Franklin, and he has some good stories here.

This is all told in a relatively breezy way, with plenty of tangents. The biggest catch is that there are good-sized stretches where Scott seems to be naming names without much point. There's a lot of material that feels like padding here, and that's a problem in a book that is on the short side to begin with. That makes this feel a bit on the slight side. A few typographical errors and factual mistakes also bothered me a bit.

"The NBA in Black and White" may not be an all-time keeper of a book, but it will hold your attention. It certainly will be of interest to those who want to learn about what basketball was like for the players in the 1960s - particularly those who were African American. It's easy to wonder how many people qualify for that. Whatever the number is, more people should get that education from Professor Scott.