By Evan Dowbiggin and Bruce Dowbiggin 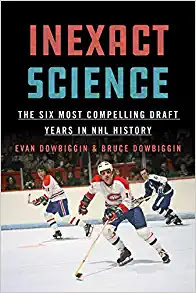 When it comes to the National Hockey League draft, you've got that right.

It's never easy to predict the future when it comes to a player's performance in professional sports. Hockey might be the most difficult of all of the major sports in that regard. A scout for an NHL team has to look at a 17-year-old and figure out what sort of player he might be at the age of 23 or so. Everyone makes mistakes in this area, but make enough of them when you do it for a living, and you might have to find a new living.

The NHL's drafts are the subject of a book from Evan Dowbiggin and Bruce Dowbiggin called, yes, "Inexact Science." To be more specific, the Dowbiggins take a look back at some of the most interesting drafts in the last 50 years. That's almost as long as the NHL has had an open entry draft.

The authors decided to pick six of the drafts, and look back at what happened. They start with 1971, when the Canadiens had the chance to pick either Guy Lafleur or Marcel Dionne with the first overall choice. There were no bad options there, of course, but Lafleur, a Quebec native, was a natural choice. However, the Dowbiggins reveal that the Canadiens at least talked about trying to obtain the second choice in a trade so they could have both. Montreal might have won even more Stanley Cups in that decade than the six they did claim if that trade had gone through.

And away we go through the drafts. The best player who could have been available in 1979 was Wayne Gretzky, but he wasn't eligible for some complicated reasons. That's also the year that 18-year-olds became eligible, which changed the draft business quite a bit. Mario Lemieux arrived in 1984, and the actions by the team looking to draft him helped change the rules of the draft down the road. The world started to open up to the NHL scouts in 1989, and the Red Wings got there first with a draft that set up their dynasty. Two years later, we had a repeat of sorts when Eric Lindros became eligible. He was supposed to be the next star, and he used his leverage to force a trade to the Flyers. Finally, there's the story of Sidney Crosby, picked by the Penguins in 2005 after they won a unique lottery for the first choice.

The Dowbiggins covers the subject in a professional manner. They talk to some people to obtain fresh perspectives on some of the issues. For example, Lindros's actions about refusing to play for the Nordiques look a little different now, knowing what we know about Aubut (charges of sexual harassment led to his resignation from the Canadian Olympic Committee) may alter our perceptions of the player's actions. They also do a redraft of the players available in a particular year, knowing what we know now. That's always fun.

One complaint about the choices might center on Gretzky, who receives most of the coverage in that chapter. That was a heck of a draft because of the extra talent that became eligible that year, although it was hard to sort it all out. Eleven players who were taken in the first round played at least 1,000 games in the NHL, and six more turned up in the later rounds. The best player taken in the first round might have been Ray Bourque, who went eighth. Michel Goulet was taken at No. 20. The latter might be more interesting than the former, although it's tough to go wrong when you are writing about the best player ever.

This is a relatively easy read, although I wouldn't call it compelling. I was guess a lot of big hockey fans know a great deal about the circumstances about each of these famous drafts. That means they might not learn a great deal here.

Therefore, those looking for some basic information about the specific stories and years in the book will enjoy it. Others not in the sweet spot still will find "Inexact Science" at least entertaining.