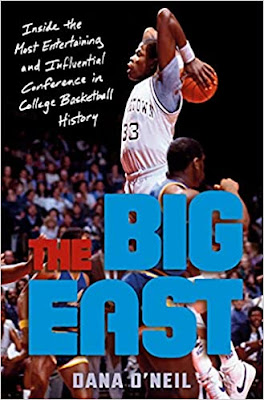 Talk to any basketball fan who was around in the 1980s, and they'll immediately become nostalgic when the Big East Conference is brought up. The league was formed in 1979, and had a magnificent run where almost every game between the best teams was a main event. The players were terrific, and the coaches were fascinating.

While the conference still exists in a different form today, a look back at those crazy first 10 years is always appropriate. Dana O'Neil, now with The Athletic, covered some of those games. She's taken a fun look back in "The Big East" - a celebration of that era.

A little history lesson might be in order before we get going. The universities in the Northeast had some history when it came to college basketball. The problem was that there were so many schools playing. The state schools tended to dominate the sport in other parts of the country. That made groupings like the Big Ten and Southeastern Conference a natural. Most of the schools in the East were independents, and were only loosely associated in the 1970s.

Then the NCAA started to insist on teams playing in a conference in order to gain admission into its lucrative tournament. Dave Gavitt of Providence had the idea of picking off the biggest schools and forming a conference in the late 1970s. The idea was to select universities that played in major markets. There were a lot of eyeballs in Boston, New York, Philadelphia and Washington. That in turn would draw television dollars. So on May 31, 1979, the Big East was born. Boston College, Connecticut, Georgetown, Providence, St. John's, Seton Hall and Syracuse were the charter members, with Villanova joining the party a year later.

It took a little time, but soon the top players started to stay close to home to play college ball. The location was attractive, as was the fact that cable television was emerging as a power player in the sports business at that time. Then the Big East moved its conference tournament to Madison Square Garden to New York City. And everything sort of exploded. In tournament week, the Garden had almost as many stars as there were on Broadway. Names like Patrick Ewing, Chris Mullin and Pearl Washington turned up. Just as importantly, there was a fascinating cast of coaches that were constants, year after year. John Thompson intimidated, Lou Carnesecca charmed, Rollie Massimino laughed, Jim Boeheim whined, and Jim Calhoun competed. They were all great in their own way.

O'Neil talked to about 60 people and it shows. It seems that all of them have a bundle of stories about the Big East, and are happy to tell them - even if they've made the rounds before. It was obviously a magical time in all of their lives, and they have no problem with reliving it. The pages go by quite quickly in an entertaining manner. The author gives almost all of the original teams a moment in the sunshine in the form of a chapter, more or less. The seven squads eventually made it to the Final Four in the decade covered.

If there are nits to be picked, this isn't a particularly analytic look at those days. It must have been rather frustrating for teams like Boston College, Providence and Seton Hall to do the equivalent of banging their heads against a wall in going against the big powers. It might have been nice to read what that was like. There were also about three too many shots taken at Syracuse about its weather there, but as a graduate I'm a little sensitive about that.

The Big East Conference essentially blew up once football came into the equation in the 1990s, and conference realignment has changed everything - and maybe not for the better. Still, the Big East has changed in order to survive, mostly with schools that don't play football. There's something nice about that. The tradition continues, and if someone wants to know why that matters, "The Big East" fills in many of the details nicely. A lot of people are going to love this book.