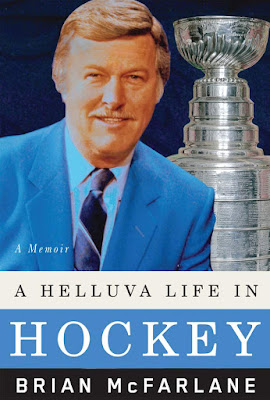 Veteran hockey fans probably remember the name of Brian McFarlane. On this side of the border, Brian worked on some of the early hockey television broadcasts in the 1960s and 1970s, introducing the game to a wider audience.

Over in Canada, McFarlane might be best known for his work on Hockey Night in Canada. He's written dozens of books and articles, produced broadcasting shows, and on and on and on. It's a rather remarkable story - even if he doesn't reveal how he squeezed everything in during this hockey-filled life.

McFarlane is now past the age of 90, but the writing bug still hasn't left him. He's come up a good-sized memoir called "A Helluva Life in Hockey," and there's no doubt he's enjoyed the ride.

It doesn't take long to get the idea of what's enclosed in their pages. The table of contents reveals that there are 45 chapters of material, covering more than 340 pages. The math says that's a little less than eight pages per chapter on average, so it's easy to be prepared for bite-sized bits.

Oddly enough, some of the most interesting parts of the book cover McFarlane's early life. You probably don't know about his father, but you might know about one of his jobs. He wrote several of the original "Hardy Boys" books. The problem was that he took a flat fee for the work, which sold millions of copies over the years. In other words, someone else got rich on it. But the senior McFarlane never was too bitter about it. Brian found his dad's diary from those years, and they add some interesting depth and perspective to the family's history.

As for Brian, his love affair with hockey started at a young age just like any Canadian boy. He was good enough to play junior hockey and well as make it to college play. But that was as far as he could get up the hockey ladder. Eventually, he turned to broadcasting, making the usual stops along the way. We go through the first couple of hundred pages that way, getting through most of the 1960s - otherwise known as the last decade when the Maple Leafs were really good.

Then the story turns more episodic. There are chapters about hockey stars he's known, executives he's worked for, business deals he's tried, and so on. Bet you didn't know that McFarlane essentially invented Peter Puck, the cartoon character that was used to explain hockey to American audiences on national broadcasts. Mention Peter to anyone over 60 that watched hockey from that era, and you'll get a smile in return. Still, a little of the material is repeated along the play, which is a bit annoying.

Two points are a worth a mention in this generally breezy book of memories. There is some settling of old scores here, as McFarlane fires back at some slights from people he's encountered over the years. For example, McFarlane quotes a chapter of a book by Ralph Mellanby, a former Hockey Night in Canada executive, and reacts to comments at length. Yes, Brian is over 90, and he's certainly entitled to state his opinion here. But the tone of it is a little nasty and petty for a book of this type.

Then there's the issue of dates. There certainly aren't many references to hockey players to took part in a game in this century. McFarlane offers much more material about such players as Red Kelly, Johnny Bower, Jean Beliveau, Don Cherry and Bobby Orr than anyone who has played lately. In other words, the last quarter-century doesn't come up.

That's going to limit the audience for a book like this. "A Helluva Life in Hockey" might appeal to some hockey fans. It has some good stories and some laughs, and the pages go by quickly. But it would help if you have to pay for the book by using your Social Security check.