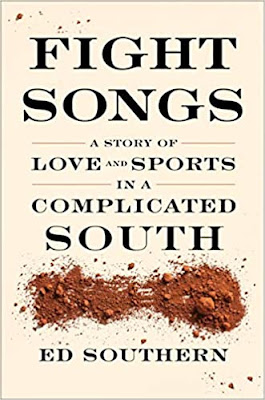 "Fight Songs" is a complicated book ... and not just because that big word is included in the subtitle.

Ed Southern is one of those serious writers, at least at times. He has a variety of credits to his name, including some books, and he is the executive director of the North Carolina Writers' Network. It's pretty obvious a few pages into this book that he's a smart guy; I had to go running to the Kindle dictionary to figure out a few of the words.

Southern does, however, have something in common with the masses. He's a college sports fan, even though he might have the thought in the back of his head that he's a wee bit guilty about it. Southern went to Wake Forest, a fine university by almost any standards. Rooting for the Demon Deacons connects him to some good times and good people from his past, and there's no harm in that. In fact, he may be considered something of a diehard.

But it's a relatively small school, especially in the world of big-time sports. That means in most years, Southern is destined to be disappointed much of the time. It's very hard for a university with a four-figure enrollment to keep up with some of the other powerhouses of college sports. That's particularly true in the South when it comes to football, when Alabama, LSU, Georgia and the big three Florida schools hover above them in most seasons.

Let's emphasize the Alabama part. His wife turned out to be a huge Alabama fan, and not just because a relative of hers wrote a book on Bear Bryant. Her whole family lives and breathes Crimson Tide football. You may have noticed that Alabama has done really, really well in the sport in recent years since Nick Saban took over. It's a happy family most autumns.

Southern takes a bit of a look on how college football got so big in the South in terms of history. Personally, I think part of the reason is that there was virtually no competition for many years. Pro football didn't arrive until the mid-1960s with the Falcons and Saints, and baseball didn't turn up until the Milwaukee Braves arrived in Atlanta around the same time. Therefore, college football was about the only way to get national attention in a sports sense. You can throw in the fact that the Southeast Conference didn't fully integrate until 1970 or so, and the story becomes even more nuanced. Meanwhile, the traditional Atlantic Coast Conference usually didn't have many national powerhouses in football, and basketball seemed to take over as the No. 1 sport - especially around North Carolina.

While history lessons are fine, Southern seemed more intent on writing about college football in the South - and what it's like to sort of have a foot in both the ACC and SEC doors at the same time. It's pretty light-hearted reading, and not particularly interesting if you don't have a dog in that hunt.

But then the pandemic came, and the tone changes with the last part of the book. Suddenly Southern had to cope with the idea that his favored universities were determined to play football if only for the money it generates. It's not a particularly good look for a school when the academic portions of its mission statement are hanging by a Zoom thread when it is expending a ton of effort to keep the games going. Then there's the rise of the "Black Lives Matter" movement. That's forced many universities to take a look at their roots, which in many cases date back to the Civil War. It's also forced some fans - at least the thinking ones - to consider how the players are raising millions of dollars in revenues for their efforts, and not seeing a very high percentage of it. Based on the recent Supreme Court decision, we're going to be hearing more about this issue in the near future. Is it OK to be emotionally invested in such a venture? That's an increasingly difficult decision that each fan must ponder.

Any conversation about this book should mention Southern's writing style. Admittedly, I am someone who prefers a story to go from A to B to C on a direct line. This one goes through a great many more letters of the alphabet, and may not end up at the expected destination. There also are plenty of tangents particularly in regard to Wake Forest. The closest I've been to the school was when I drove past the exit on the Interstate, so the references left me cold.

I'm not sold on the idea that "Fight Songs" works particularly well, even if graduates will enjoy it and those in the "mixed marriages" of different loyalties will recognize some of the characters. At the least, though, its readers will be given some ideas to consider as they get ready for the next rivalry game.