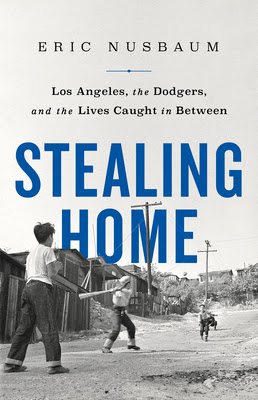 Some of the best sports books are the ones that barely touch the activity that takes place on the playing field.

"Stealing Home" can be found under this category. The twist is that it's more or less about the actual playing field.

The location of this book is the city of Los Angeles - more particularly, Dodger Stadium. The structure was built in 1962 as the new home of the Dodgers, who had moved from Brooklyn in 1958. The centerpiece of the story to some extent is - to paraphrase the Talking Heads' song - "How did it get here?"

The answer to that is a little complicated. Author Eric Nusbaum tells a story about the construction of the facility. Some might know a few of the facts involved, but it's certainly nice to have the full story. He tells it by breaking matters into three distinct parts, and then letting them slowly come together with a rather loud bang.

The first is the essentially the tale of three communities within the city limits - Palo Verde, La Loma, and Bishop.  All sorts of people came to Southern California throughout the 20th century, and some of them had Mexican heritage. That particular group filled up the communities in question. It was a classic case of people coming to that part of the world in an attempt to finding a better life. It wasn't easy - it took an effort, day-by-day, inch-by-inch, to crawl a bit ahead. But many wound up with their own land and a roof over their heads.

Then there's the story of Frank Wilkinson. A son of a doctor, Wilkinson did some traveling as a young man and developed something of a social conscience in the process. When he saw the poor conditions that some people lived in, he wondered if there might be a better way to raise their standards of living. That took him in a couple of different directions. One was that he became attached to the concept and potential benefits of public housing. That was a relatively new idea after World War II, when America was feeling powerful and confident that it could solve almost any problem. The other is that he was becoming an advocate with what we might call left-wing political thought, which included a brief stay as a member of the Communist Party. You could imagine how well that went over, particularly in the early 1950s. No wonder the number of pages in his FBI file ran into six figures.

Finally, we had the Dodgers. Good books have been written about their departure from Brooklyn, as the team was something of a victim of the changing demographics of the era and political in-fighting. The move to Los Angeles didn't really change much of that; it just changed the names. Owner Walter O'Malley eventually got his nearly perfect ballpark. What it did to the city is another story.

Nusbaum does some considerable juggling here. He jumps from subject to subject as time marches on - three forces destined to collide without anyone realizing it. It doesn't take a spoiler alert to realize that Mexican population and Wilkinson are going to wind up as the losers of the story. The author starts the story with a news item that is relatively familiar in cases of this nature. A family becomes involved in a dispute with the city, and then is forced to leave its house when the bulldozers arrive. Sometimes, you really can't fight City Hall - at least indefinitely. What's more, the family and the city were only a few thousand dollars apart on the value of the property. It would have been so much easier just to pay that money as a fair transfer cost for the land and move on.

The author's most interesting writing quirk here is the number of chapters: 76. He makes a point quickly and moves along to the next. It works better than you might think. The research is impressive and comprehensive. Nusbaum tells the story quite fully. He certainly has a point of view on the entire affair, and he makes a good argument. The only complaint that could be made is that a little more background and information on the Dodgers' move could have been supplied.

"Stealing Home" might not appeal to those who prefer a little baseball with their baseball books. However, this book works nicely for people who simply want to learn about an under-publicized story about construction of one of baseball's cathedrals.