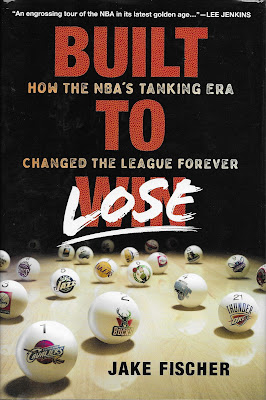 If you'd like to read about the National Basketball Association in the past few years, "Built to Lose" ought to scratch that itch.

Just don't expect to read much about basketball.

That seems like a contradiction, but author Jake Fischer has different goals for his book than following the bouncing ball into the basket.

This is about the business side of putting together teams in the NBA in the last few years. In fact, it concentrates on the franchises that not only weren't particularly good at that skill, but indeed to go the extra mile to try to lose games in the short term in an effort to be much better in the future.

That process grew to be called "tanking," and it became rather popular in the mid-2010s. Indeed, the stars of the book probably are the Philadelphia 76ers and their general manager at the time, Sam Hinkie. He held that job from 2013 to the spring of 2016.

Hinkie was a major proponent of the concept that a particular team shouldn't aim to be mediocre all the time, stuck on a treadmill of .500 indefinitely. It's better to tear things down, the thinking went, and obtain top-level talent in the draft than try to maximize efforts to win a few extra games in a particular season. That's the way the rules were written at the time, and it made some sense to take advantage of that fact.

Fischer goes through three seasons and offseasons in depth from the perspective of the Sixers and some of the other teams who were struggling. The list includes a couple of traditional powers in the Los Angeles Lakers and Boston Celtics, as well as stuck-at-the-bottom teams like the Sacramento Kings. With the perspective of time, people could not reveal what was going on in their minds in a particular moment from the 2013-2016 era - which, in terms of NBA rosters, is the distant past. The author reportedly talked to more than 300 people for the book, and it reads like it. This sounds very authentic.

The NBA tinkered with its lottery system a few years ago to make losing a little less attractive. Still, it's going to happen in basketball. It's one of the few team sports where one player can make a huge difference in a team's fortunes. As an example, check out the record of the Cleveland Cavaliers with and without LeBron James over the past several years. The problem is determining who that player might be.  There are no guarantees when it comes to looking at players who might be 19 years old and forecasting just how good they might be in a few years. And if they are good, they might flee the original teams at their first opportunity for any number of reasons.

This book comes with something of a major warning. Only good-sized NBA fans need to dive into this. It's tough to follow the sport from a distance, since I live in a city without a team. So for example, the pick-by-pick recaps of drafts can be fascinating to learn of the thinking that went into each choice. However, sometimes the recognition of the players involved isn't too great. That's partly my fault, since I don't keep up with some of the names enough. It's also a reflection of the sport, as there are no guarantees that come with a draft choice in the first half of the first round.

Even so, there are all sorts of good anecdotes that are uncovered here that ought to leave anyone with an interest in basketball entertained. So, feel free to pick up a copy of "Built to Lose" if you are curious about an odd time in basketball history. And maybe you can do what I did - keep a list of draft choices from that era handy for reference.