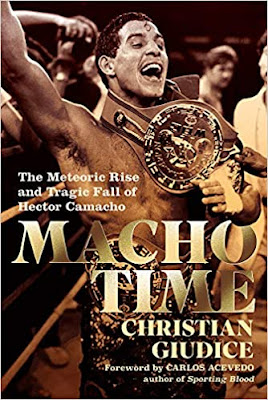 I had a relatively close, in-person look at Hector Camacho in the spring of 1985. He came to Buffalo to fight Roque Montoya for the NABF lightweight champion. The Macho Man was already a rising star at that point, and headed for bigger things and bouts.

What I remember most about that week was the chance to see Camacho in action leading up to the fight. Camacho was everywhere, obviously having fun with appearing before the public. I believe my observation at the time was that he was like an elf, sprinkling fun wherever he went.

At a prefight luncheon, most of the fighters on the card spent their speaking time trashing James Broad, a heavyweight contender at the time who wasn't too popular with his peers for whatever reason. Hector jumped right in and though Broad had more than 70 pounds on him. Camacho said something like, "Give me a baseball bat, and I'll jump into the ring with him too."

For all the glitter and hi-jinks, Hector put on a good, workmanlike performance in beating a game Montoya. He obviously was someone to follow for the rest of his career.

And what a career it was. Camacho had plenty of highs and some terrible lows in a too-eventful life. Hector, in fact, was so busy that it was tough to keep up with him. Therefore, Christian Giudice's book, "Macho Time," is a welcome addition to the boxing library.

Camacho was born in Puerto Rico but moved to New York when his parents separated when he was three. It wasn't long before he was roaming the streets of Spanish Harlem, getting into some trouble but displaying a likeable personality that usually escape major incidents - although he did spend a little time in jail along the way. Luckily for him, Camacho became involved in boxing - a perfect match of his physical skills and his personality.

Guidice makes it clear that Camacho was a natural at the sport - a standout before he became famous. Opponents couldn't find him, let alone hit him. Hector rose through the ranks relatively quickly. It took him three years to become a super-featherweight champion - only to see him move up in weight after two defenses. It was a similar story at the lightweight division, and in the junior welterweight title. While he piled up the wins, Guidice makes a good case that Camacho was never as good as he was when he first burst on the championship scene.

Camacho couldn't avoid the usual problems that often beset those in his situation - particularly boxers. In other words, you can take the boy off the streets, but you can't take the streets out of the boy. Camacho became a father at a young age, spent most of his life using drugs, and had no idea how to handle money. He fought until the age of 48 or so, and then was killed in what looked like a drug deal gone bad a couple of years later.

Camacho's life story didn't really have the proper timing in some ways. He seemed to just miss bouts against epic challengers that could have proved his greatness. Hector didn't fight people like Ray Mancini and Julio Cesar Chavez until he was past his prime. That hurts the narrative a bit, since only big boxing fans would know some of the names that pass through here.

The author certainly did his homework here. The list of interview subjects listed at the end is long and impressive. He also watched a lot of videotape as well, based on his descriptions of the major bouts of Camacho's life. Giudice might have used a few too many words in those accounts, slowing the narrative down, but that's a relatively small complaint.

The Macho Man had quite a ride in his too-short life, and "Macho Time" captures it quite well. For those who followed Camacho's career closely, this is the book they've been waiting to read for years. As for the rest of us, it's a worthy effort.