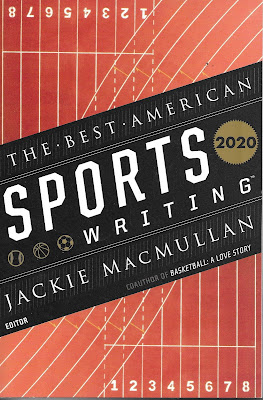 To use a newspaper term, it's sadly time to put a "-30-" at the end of the Best American Sports Writing series.

Series editor Glenn Stout announces in the foreward that the yearly edition has come to an end after 30 years. It's been quite a run. Such anthologies have been around for decades; you might be able to find a few dusty copies in a second-hand bookstore or a big city library. The Sporting News picked up the tradition for a while. Then in 1991, the tradition resumed under the caring, watchful eye of Stout.

We've seen through the pages of these anthologies how the business has changed so dramatically in the past three decades. The sources for material no longer are almost exclusively devoted to major newspapers and magazines. Plenty of good work has been presented by websites in relatively recent years.

You can also look at the names of the editors of the annual editions since 1991 and see another worthwhile change. There are some great names on the list - David Halberstam, Frank Deford, Tom Boswell, Dan Jenkins, Rick Reilly, Peter Gammons, Wright Thompson. In 2011, a woman joined the formerly all-male club when Jane Leavy got the job. Now she is joined by Jackie MacMullan, a former Boston Globe reporter who now does work for ESPN.

Reviewing books in this series always has been a bit of a challenge, because usually the stories are almost always worth reading. The difference from year to year usually comes from the editor's picks, which are a matter of personal preference. That's certainly true for the 2020 book. MacMullen writes in her introduction, "None of the stories highlight exploits of stars from the major professional sports teams. Increasingly, elite athletes have opted to create their own 'brand,' churning out self-made glossy presentations shellacked with a veneer that lacks the authenticity of a story well told."

That's certainly true here. It's also true that the definition of "sports writing" is a bit stretched here, and that it's a rather dark collection of articles. There are stories here that you'd never find in the sports section of a newspaper, or in a sports magazine (remember them?).

We need examples. A soccer game provides just a bit of framework on a story by Roberto Jose Andrade Franco on the problems in Juarez, Mexico. Kurt Streeter has an essay on the monuments of Richmond, which includes Arthur Ashe. Bryan Burroughs writes about killer tigers in India. Steven Leckart chips in with a story of a unique bank robber who uses a bicycle for his getaways. John Griswold has a fine look at a Louisiana prison rodeo - who knew? Emily Giambalvo tracks down some of the dogs who were involved in Michael Vick's dogfighting ring - many of whom are living happily ever after as pets.

The book has plenty of other stories of course, but many come at issues from a different angles. There's the physical toll of playing championship chess, a recreational hockey player's experiences with concussions, the top women's college basketball player who turned down the pros to become a cloistered nun, the death of an Olympic cyclist, a complete novice tries to cover a tennis tournament, and so on. There are even some good old-fashioned investigations - the Astros' sign-stealing scandal, the NBA executive who turned into a $13 million crook, and the sexual predator lurking around track programs.

No, there aren't a whole lot of feel-good stories here. At least the book opens with a Bill Plaschke piece on how baseball is used to help those suffering from Alzheimer's. But there's a key point to be made here: I started every article, and finished almost every article (I must admit I skimmed the end of one from the halfway point). Therefore, MacMullen was clearly doing something right.

This final collection may not be for those who have a narrow definition of sports or like their fun and games to be mostly fun, but those who read it should find it rewarding. And a word of thanks goes to Stout and Co. for 30 years of good reading. Let's hope someone picks up the ball and runs with it, as they say in corporate America, in the future.