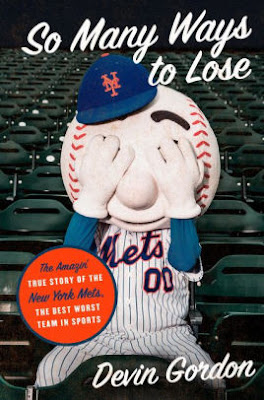 The New York Mets arguably have done less with more than any franchise in baseball, and perhaps in team sports in general.

That's a big statement, but a case can be made for its validity.

The Mets have been around since 1962, when they were something of a replacement for the Dodgers and Giants. Those teams moved to the West Coast in 1958, leaving New York without a National League team until the Mets filled the void. Since then, New York has won two World Series titles, and been in the playoffs every so often. Still, for a team with most of the economic advantages of the Yankees, they probably should have done better.

(Note: I guess the NBA's New York Knicks might be even worse in this department, although the Mets have had a flair for more spectacular flare-outs over the years.)

This brings us to Devin Gordon's book, "So Many Ways to Lose."

Gordon has a good-sized list of writing credits to his name, including regular work at GQ and Newsweek. Here he tries something new. A Mets' fan forever, Gordon has come up with a book that is something like a history of the team - except that it's done with a different approach and attitude. In other words, this is not the Doris Kearns Goodwin approach to history.

This is a New York City writer, with accompanying opinions, at full bluster. Gordon has seen a lot over the years, and he's still angry about some of the lowlights - whether it's a team that was buried in the standings for one reason or another (everything from bad baseball judgment to the Bernie Madoff scandal) or came agonizingly close to doing something memorable. I guess the latter could be summed up by Carlos Beltran's take of a called third strike to end Game Seven of the 2006 playoff with the St. Louis Cardinals.

This book started a little slowly for me. It had a bit too much attitude for me at the start - kind of like bumping into a guy who was a bit too sure of his own opinions on sports matters, and who tried to turn those opinions into facts. I tend to run from those people when I get the chance.

However, over the course of a few hundred pages, Gordon goes about the slow process of winning the reader over. He interviewed several people about Mets' history, including Mike Piazza, Ron Darling, Mackey Sasser, Frank Viola and Gary Cohen. They are surprisingly candid about their days with the Mets, and that helps the story. Gordon also did plenty of research into the Mets' background - who knew that the team had a pedophile on its 1962 roster? And the writer has enough funny lines to move the story along, even if sometimes it's tough to tell when he's trying to make a point through exaggeration and when he's presenting evidence.

This isn't a bad time for such a book. The Mets have been bought by billionaire Steve Cohen, and it seems likely that the team's fortunes will take on different directions in the future. If you want to call the sale an end of an era, be my guest.

It's tough to say how well this book like this will go over outside of the confines of Metropolitan New York. However, that's not the target audience for "So Many Ways to Lose." Long-suffering Mets fans no doubt will enjoy the discussion presented here, even if they don't agree with all of the points. In that sense, you'd have to say Gordon succeeded in his goal.