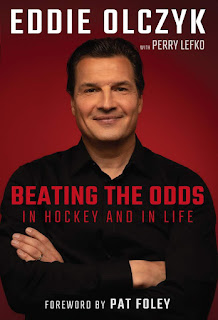 By Eddie Olczyk with Perry Lefko
Eddie Olczyk certainly has led an interesting life to date.
He was a good hockey player in his day, and went on to make a seamless transition to announcing after his playing days were over. Eddie does the Blackhawks games now as well as top games for NBC. He's got a good-sized, happy family. and seems to be popular in and out of the workplace.
But before this review starts to read like a story book, Olczyk went through a battle with colon cancer a few years ago. As the book's title, "Beating the Odds," indicates, Olczyk came out a winner.
The medical portions of the book provide much of the drama for Olczyk's story. He went public with his story along the way and then wrote this as an attempt to spread the word about preventive care and treatment. Some of his friends went to get colonoscopies in the process; maybe Eddie saved a few lives along the way. The descriptions of the "joys" of chemotherapy allow the reader to find out what that experience is like, which sounds a whole lot better than doing it first-hand.
Until then, life was rather good for Olczyk. He was something of a child prodigy in hockey terms, a No. 1 draft choice of his hometown team, the Chicago Blackhawks, in 1984. He stepped right into the lineup - no easy task - and scored 20 goals as an 18-year-old. The forward had 29 more goals the next year, and it looked like it was a case of hometown hero makes good. But Olczyk slumped to 16 goals in 1986-87.
A trade to Toronto helped greatly, and he scored at least 30 goals in all three years there. From there Olczyk landed in Winnipeg, and he was really good there too. In 1992, Olczyk was a consistent scorer at the age of 26 and looked to be in the prime of his career.
But a trade to New York changed everything, and it's not exactly clear what happened - even to Eddie. Rangers coach Mike Keenan didn't play Olczyk very much , and his production dropped considerably. Keenan, by the way, is the only person in the entire text who gets really carved up a bit. Eddie never fully regained his scoring touch, except for a couple of decent years for Winnipeg (second time around) and Los Angeles, and became something of a journeyman. Eddie played more than 1,000 games and 16 years, but it's easy to wonder if something went wrong. There's no answer here.
In any event, Olczyk finished his career where it started in Chicago, and he landed a job as a broadcaster in Pittsburgh. That led to a jump to the head coach's job with the Penguins for a season and a half, and then it was back to broadcasting. As his role at NBC grew, Olczyk found time to do some work on his favorite hobby, horse racing. He obviously loves everything about the ponies, especially handicapping races. Ed is happily surprised that he's now getting paid occasionally for hanging around a racetrack.
There are a couple of flaws in the book. Admittedly, I'm no gambler, but I did grow a little tired of stories about big financial wins on bets at the track. Yes, he can afford it, but it's easy to wonder how much losing he's done during the rest of his time at the betting windows. Olczyk and coauthor Perry Lefko also receive testimonials from a variety of people in Olczyk's life along the way. That's a fairly common technique, but I found myself wishing that those people could provide insight and examples about Olczyk's life rather than simply saying nice things. As it is, the information comes off as a little redundant.
It's not that big a deal, though. "Beating the Odds" is an easy, interesting read told with good humor. Olczyk obviously has lot of friends from his work on and off the ice, and let's hope he continues his good run for years to come.
Four stars
Learn more about this book.
Be notified of new posts on this page via Twitter @WDX2BB.
Posted by Budd Bailey at 5:15 PM