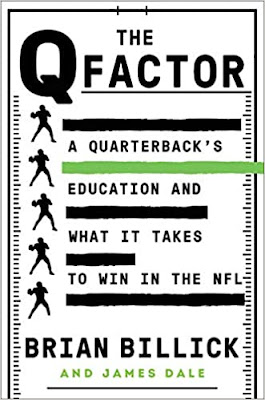 By Brian Billick and James Dale

Looking into the future when it comes to young pro football players is not exactly a science. That's part of the fun of the NFL draft, as teams look at players who are just into their 20s and try to predict what the next 10 to 15 years of their football lives will be like. It's a difficult task, and it can be fun - as long as your job doesn't depend on being right more often than wrong.

That is particularly true when it comes to quarterbacks, the most important players in a given game. No one has a larger role in the outcome of a particular contest. Pick the right one on draft day, as the Patriots did once upon a time with a fellow named Tom Brady, and you'll be set for a couple of decades. Guess wrong, as the Chargers did with Ryan Leaf and the Raiders did with JaMarcus Russell, and you'll pay the price. Not only is there an economic cost to bad decisions that can runs into the millions, but there's also time that is wasted in the development of a football team.

The question become - how do we improve the percentages when it comes to taking the best player available? It's an interesting question, especially to football fans, and it's the basis for "The Q Factor" by Brian Billick and James Dale.

Billick knows something about the importance of having the right quarterback. In 1998, he was the offensive coordinator of the Minnesota Vikings team that set an NFL record for points in a season. That got him a job as the head coach of the Baltimore Ravens, and he went on to win a Super Bowl during the 2000 season there. However, the Ravens did it not because of offensive talent (their quarterback in the Super Bowl was Trent Dilfer, who will never be confused for Peyton Manning), but because they had one of the great defenses in the history of the NFL. In the succeeding years, the Ravens were frequently good but never good enough to return to that height. Part of the reason is that they never had that superb quarterback who could lead the team to those last couple of steps. Billick lost his job after the 2007 season.

The book gets off to an absolutely spectacular start. Billick focuses in on the quarterbacks taken in the 2018 draft. That was a big year in that department, with several going in the first round. But there was no clear consensus at the time about who might be better. Billick breaks down what each quarterback - Baker Mayfield, Sam Darnold, Josh Allen, Josh Rosen and Lamar Jackson - brought to the table, and adds a little gossip from his sources around the league. All had their supporters, but none looked like a clear No. 1 pick. It is great fun, at least for football fans, to have an expert break down each player in such a details, intelligent fashion.

Billick jumps into quarterback talk from there, looking at what goes into a great player at the position. The stereotype is a guy who is 6-foot-4 with a sturdy body and a big arm. Not every successful quarterback fits that mold though, even though we may get carried away with that model. Then he moves through what he calls extrapolations, searching for trends of improvement without the ingredient of wishful thinking ("Yeah, he'll get more accurate with a little playing time...").

The author then goes back to the Class of 2018, seeing how they did in their rookie year, and then in their second year in 2019. As could be guessed, the jury is still out on them. However, the star of the crew is Jackson, who was the league's MVP. Rosen's career has been close to a wash-out. The others have shown some good signs but haven't been consistent. In other words, we still don't know if Mayfield, Darnold and Allen will ever get better.

Billick stresses production in his thinking when it comes to determining signs of greatness. The good ones figure out a way to move the chains and score touchdowns consistently. Russell Wilson fits no one's model as the ideal size for a quarterback, but he's been very successful. Pat Mahomes improvises more than most but gets the job done. Neither came into the league with guarantees. Wilson wasn't a first-round draft choice, and the Bills, who needed a long-term solution at the time, traded their first-round pick to the Chiefs - who took Mahomes. Football may be changing a bit, but Billick argues that a team's approach has to be altered to fit a quarterback's talents - and not the other way around.

Ever since the Ravens were featured in the HBO series "Hard Knocks" some years ago, I've been very impressed by Billick. He has a first-rate mind and knows the business. In fact, I wondered why he didn't get another chance at an NFL job after leaving Baltimore. The Bills sure had chances to snap him up over the years.

"The Q Factor" isn't something I'd call beach reading for most, and occasionally it lapses into material that would feel right at home in business/leadership books. It's not much of a problem. When this book is good, it's superb. It's always good to hear from an expert on a subject he loves.

Be notified of new posts on this site via Twitter @WDX2BB.
Posted by Budd Bailey at 1:59 PM