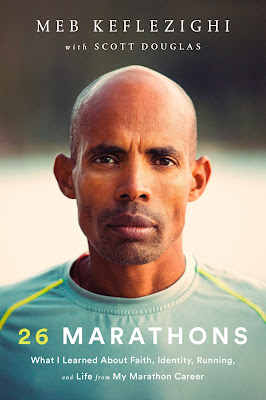 By Meb Keflezighi with Scott Douglas

It's really not easy to be a professional marathon runner.

Not only is there a ton of physical work, featuring mile after mile on the roads. It also hurts.

That might be the biggest message to come out of "26 Marathons," a book from Meb Keflezighi. Marathon runners do more than their share of suffering, whether it is in training or in the actual races. They know that going in, since the human body isn't exactly designed to hold up for a run of 26.2 miles. But they don't know when exactly something will come up that will cause some suffering.

Keflezighi is certainly on the short list of the greatest American marathon runners in history. The native of Eritrea in Africa moved to this country at a young age, and became a superstar in his chosen support. Keflezighi set a variety of records in his career, but in the marathon he won a medal at the Olympics and won the New York City and Boston Marathons.

Naturally, none of that comes without preparation. You've got to do some work beforehand. Meb obviously pushed his body right to its limits along the way, racking up as many as 120 miles of running per week. Runners have to learn when to run through pain and when to stop because of injury. Make the wrong choice and they could be on the sidelines for a considerable amount of time.

As you might guess, Keflezighi ran 26 marathons in his career, which is convenient since it almost matches the distance in miles. Each of the races gets a chapter. The first was in New York City in 2002 and the last was in the same place in 2017. That's a good long run, pardon the pun, as Meb ran competitively into his 40s. He "only" won three of them, but he was always competitive and only posted a DNF (Did Not Finish) once in them.

What is striking about the stories is that is how much can go wrong. Most runners have forgotten to do something on the way to the starting line. Meb tells the story about how he packed a breathing strip into his shoe as usual, but forgot to put it on. Then his foot started getting chewed up, and he opted to run with it for another 20+ miles. You can guess what his foot looked like at the finish. Meb also has stories about suddenly feeling terrible during a race, in which he had to vomit or felt like vomiting but couldn't. There are races where a leg muscle tightens up or his legs simply stop working, and he has to walk a bit and make the best of the situation he faced.

Each chapter is somewhat bite-sized. It takes about five or so minutes to get through each one, which contain a description of the race and a few tips about running that most people probably have heard elsewhere. In other words, it probably will take a bit more than two hours to read this - appropriate, since that was about how long it took for Meb to actually run one of those races.

Meb's life story is a dramatic one, and he covered it in an earlier book ("Run to Overcome"). Keflezighi certainly ranks as one of our most admirable star athletes, and he was an easy choice for someone looking to root for a top runner to do well.

"26 Marathons" supplies more reasons to root for him on a personal level, but otherwise isn't particularly memorable. Therefore, I'd advise runners to start with that initial autobiography to learn more about Meb. If you want to read more of his story, this latest book will be waiting for you.

Be notified of new posts via Twitter @WDX2BB.
Posted by Budd Bailey at 12:15 PM