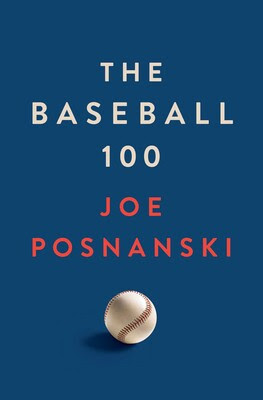 Ever hear of "the sweet spot" in sports?

It usually comes up in baseball, although it probably applies to golf too. The sweet spot is that magic place where a ball meets the object perfectly in order to achieve maximum distance.

With that in mind, let's discuss "The Baseball 100" by Joe Posnanski.

The idea of discussing baseball's best all-time players is right on his sweet spot.

When the pandemic arrived in early 2020, Posnanski started to write an article a day about the 100 best baseball players for the Athletic. It obviously required a lot of work, but each article was something of a mini-biography of baseball's greatest names. While it didn't linger on basic information, there were so many stories and rankings and quotes about each player that all 100 of them were a delight to read. Now it's all in one place in book form; there obviously been a little updating since the original version was published.

Posnanski always has come across as a bit of a romantic in his writing, particularly when it comes to the history of the game. He loves the idea that baseball has been played since the middle of the 19th century in one form or another, and therefore has a connecting thread from then until now. Posnanski is realistic enough to know that sometimes there are flaws in our heroes, but he emphasizes the positive for the most part here. It works really well in this format. When Posnanski wrote a book about Joe Paterno at Penn State, the Jerry Sandusky scandal was just breaking and I got the idea that he became uncomfortable with incorporating that aspect of the story within the large concept of Happy Valley.

I know a little something about these lists. In the last few years I've written four of them - Buffalo's sports numbers from 0 to 99, Buffalo's biggest trades, Buffalo's top free-agent signings, and Buffalo's draft choices (by overall pick number from 1 to 100). They aren't easy to do, and Posnanski spent more time on his list than I did in all four combined ... times five. My guess is that he made one very good decision when it came to ranking the players: he didn't take the exact placement all that seriously.

Therefore, Jackie Robinson comes in at No. 42, the only fully retired number in major league baseball. Joe DiMaggio gets No. 56, after his hitting streak. Frank Robinson and Mike Schmidt share No. 20, because they wore that number. No. 19 is skipped, because  the Black Sox scandal was in 1919 and this way the numbers even out at 100. You want to argue that DiMaggio should be higher? Go ahead. Posnanski is too busy coming up with fun information to care too much, and you're missing the overall point. That said, his opinions seem generally on target.

There are only a couple of warnings that come with this book. There are some advance statistics involved, such as ERA+ and WAR. Posnanski does explain what the figures mean at the beginning. I can't say they should get in the way of your enjoyment of the book.

In addition, this is 300,000 words. I read it on a Kindle, and just discovered that it translates to 880 pages. That's a lot of reading, especially if baseball is not one of the most important parts of your life. I think the only longer book I've ever read was "The Power Broker." Maybe you don't want to lug it to the beach. Read it while sitting on your favorite chair or couch instead.

"The Baseball 100" will tell you about players you don't know, and about players you thought you knew. It does it in a style that will leave you more than interested every step of the way. Aaron Judge would be proud about how this one came off the sweet spot and exited the ballpark.