Review: Remembrances of Swings Past (2020) 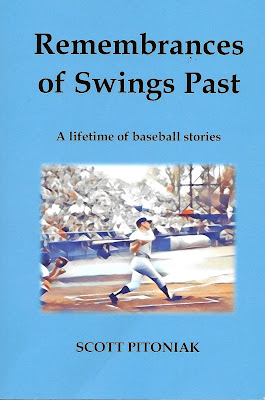 Apparently retirement didn't stop Scott Pitoniak from his writing/publishing career. It just moved him into a new phase of his career.

Pitoniak is the fine sports writer from the Rochester area who has put together more than 20 books. This is the new one - at least as of this writing.   "Remembrances of Swings Past" is something of Pitoniak's greatest hits - with the emphasis on hits.

That's because this anthology is all about his work in baseball. He's obviously a huge fan of the game, having convinced his father to make some car trips from Rome (NY) to New York (NY) for New York Yankees when he was a child. The baseball still had a grip on Pitoniak, based on the way he writes so affectionately about the game.

So upon opening the book, we're off on a good-sized journey through the National Pastime through Pitoniak's eyes and pen/typewriter/computer. Since Scott spent most of his career writing in Rochester, you might guess that the book would concentrate on that city's athletic heritage. That's represented here, of course, but there's more to the story.

Pitoniak jumps on anything that could be a good story involving the game. You can tell that he enjoyed going to the Hall of Fame induction ceremonies in Cooperstown, talking to a variety of people who passed through that picturesque little town - including Pete Rose, who looks as if he'll be on the outside of the Hall looking in for the indefinite future. Some history lessons come up along the way, as do the human-interest story such as the one about a baseball reporter who just happens to be blind.

Pitoniak's boyhood affection for the Yankees still can be implied by reading some of his stories here. While that wouldn't be my choice for a team to back (ahem), Scott no doubt realizes that the Yankees are the favorite team of a plurality of fans in Upstate New York and thus he was writing for an enthusiastic share of the audience when he did stories on pitcher Ralph Terry and public address announcer Bob Sheppard.

This is a self-published book through Amazon.com, and it doesn't have a great deal of bells and whistles connected to it (photos, graphics, etc.). Still, I've read a few of such projects, and I feel safe in calling it as well-edited as any such book that I've read. It's nice to have a professional in charge of the job.

Each of the stories printed in more than 300 pages comes with a date. The one question worth asking is where the story originally appeared in print. I'm not sure what the copyright issues might be in such a book, but it did strike me as an odd omission. What that covered, I'll add that the book doesn't really feel dated at all. Pitoniak gets credit for that too.

Scott isn't a writer that has much venom in him, and he isn't trying to impress the reader about how smart he is (even though he's clearly a bright, inquisitive guy). The stories in "Remembrances of Swings Past" come out smoothly with the spotlight on the subject. That's harder than you'd think.

One of the attractions of baseball for many is the chance to lean back into the past and talk about other eras. Pitoniak's book will more than please those who are in that classification.

Labels: Review: Remembrances of Swings Past (2020)