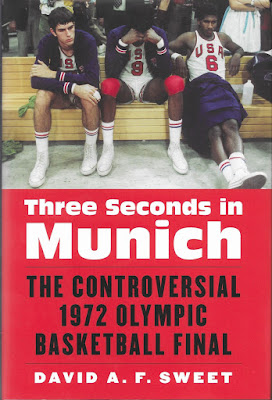 The publication of a book like "Three Seconds in Munich" brings up something of a quandary for a book reader - and, more specifically, a book reviewer - that can be a bit rare.

There's a "haven't I been here before feeling" to reading this.

Back in 2012, Mike Brewster and Taps Gallagher wrote a book about the 1972 Olympic basketball final between the United States and Soviet Union. It was called "Stolen Glory."

I went back to my review of it, now posted on Amazon.com, and looked it over. Some of the remarks for that book probably could apply nicely to "Three Seconds in Munich." I don't really want to do a compare and contrast approach of the two books, partly because 2012 was a long time ago so I'm not sure about how the details might match up.

The subject is still an interesting one. You probably could call this the Soviet equivalent of the "Miracle on Ice," the 1980 hockey win by the United States over the Soviet Union at the Olympics. The twist with the 1972 story is that it came with a great deal of controversy, to the point where no one - even the winners - probably feel too good about what actually happened in the game.

I remember watching the game, and the ending really was a mess. Buzzers were going off at odd times, and rules were forgotten or not enforced properly along the way. The referees allowed matters to get out of hand, and chaos followed. Certainly, the language barriers involved didn't help.  basketball official R. William Jones should have kept his nose of the whole situation, especially when he seemed to be rooting for the Soviets in order to made the event more competitive because of more than 30 years of American domination. The best solution probably would have been to declare it "no contest," like they do in boxing, and give out gold medals to both sides. But that wasn't done too often in the Cold War era.

There's little doubt that Sweet is on the side of the Americans here. In his recap of events during the game, he points out all of the times that the USA was apparently a victim. It can feel a little heavy-handed in spots, as if he is more of an advocate than an observer. Sweet also has a chapter called "Was the Fix In?" While the book brings up a few pieces of information, some of it interesting and some of it at least subject to interpretation, you'd think an arranged outcome would have been a bit neater in nature.

Sweet deserves credit for tracking down some of the American participants, and getting good stories. The opening tale from Tom Burleson on his experience during the terrorist attack in Munich is fascinating reading, and there are quotes from others about the Games and the basketball final. A few Soviet players also are heard here, which is nice.

Add it up, and "Three Seconds in Munich" offers a good overview of what went on that night in the summer of 1972 in Munich.  For those who read "Stolen Glory," you probably don't need to read this version. But if you didn't, it should work pretty well.