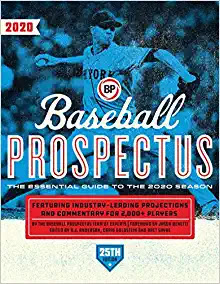 Milestones can sneak up on you ... sort of like an unexpected fastball.

The ever-changing group from Baseball Prospectus celebrates its 25th anniversary this year. That means it is a good time to look back a little bit.

We've come a long way since Bill James started producing Baseball Abstracts in the 1970s out of his house in Lawrence, Kansas. He more or less pointed the way to using data to test theories about sports, and it started a revolution. Since that time, when the information hasn't been available, we've figured out a way to get it.

The folks from Baseball Prospectus have been the leaders in that movement in baseball. They've got an avalanche of tools in their kits, which can be a little intimidating. Luckily, there's an effort to drive the numbers toward conclusions about player development. They aren't always accurate - we are dealing with humans, after all - but it's become a heck of an annual resource.

We're now at the point where analytics is an important part of almost every sports organization. Graduates from Baseball Prospectus are littered throughout organized baseball. One of the most famous now might be Chaim Bloom, the Chief Baseball Officer of the Boston Red Sox. Oddly, the head of the alumni association might be Nate Silver, who became famous through his political analysis. Data is still data, no matter what form it comes in.

There are bunches and bunches of contributors to this book now. You can have the best editors in the world under such circumstances, and the writing is going to come out uneven in such circumstances. The book has gotten away from its old snark since its origin, which is missed a little bit at times but probably helps the product be taken more seriously.  The team essays are the best example of that. A few seemed a little pointless, while others were off target. But the player essays, the meat of the book, are fine as usual. You'll refer to it during the season every so often.

Most of the complaints center on a couple of points:

* The Kindle version of this book is a mess. Without seeing it, I would guess that a publication with so many charts and graphics wouldn't translate well to a Kindle. Easy solution - buy the actual book.

* There are a few comments that could be considered left of center politically along the way - emphasis on "a few" - mostly connected to domestic abuse charges of players. The material comprises a tiny percentage of the words in a 588-page book ... but don't say you haven't been warned.

There's not much new in this year's edition. One addition was to highlight the player capsules of the top 100 prospects in baseball within the team sections. I usually don't spend much time reading the capsules of players who haven't appeared in the majors yet, but those now carry a "must read" signal to casual readers like me. It's a good move.

After finishing "Baseball Prospectus 2020" you'll feel ready for the upcoming season. Can't ask for more than that. It's another great job.

Be notified of new posts on this site via Twitter @WDX2BB.
Posted by Budd Bailey at 11:23 AM