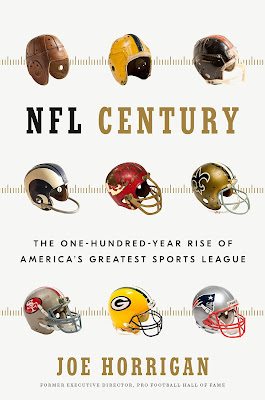 The National Football League is in the midst of celebrating its 100th season right now, and it is really good at it. The century mark is an important milestone as these things go, and football fans haven't been able to miss the hoopla surrounding it. The NFL has used a variety of techniques in reviewing its history, including small features on their telecasts..

The subject is a natural for a book with a connection to the Pro Football Hall of Fame, and that's where Joe Horrigan comes in. He is the former executive director of the Hall, and probably knows more about the history of the game than anyone. That's why he's a good choice to write "NFL Century."

Horrigan makes one good decision right from the start in this publication. The basic question about such a book is - what to include? It's been a busy century, naturally, and someone could write 100 books on what went on - one for each year. That would be rather expensive and time-consuming, of course.

Therefore, it's a smart move to break the history of the NFL into 33 bite-sized chapters. You could argue about what events should be included in such a list, but it's hard to complain very much about Horrigan's choices. He includes, as a sampler, the formation of the league, television milestones, commissioners, battles with rival leagues, and great dynasties such as the Cleveland Browns, Green Bay Packers, Pittsburgh Steelers, San Francisco 49ers, Dallas Cowboys, and New England Patriots. Put it this way - any larger history of the league certainly would include all of those items.

A book like this also has the problem of trying to draw in as many people as possible regardless of age. In other words, readers have lived through parts of the various eras, and bring some knowledge to their reading. But, the book has to hold the interest of people of all ages. A chapter on the great teams of the 1970s has to give the facts for those below 50, but still be fresh enough so that those above 50 will not only enjoy the memories but learn a few things along the way. Horrigan has added enough information through good research to do that.

Complaints? Well, a few names get mangled and a few facts go unchecked along the way. It happens. You may have a favorite player, team or moment that might be overlooked in the process. That comes with the territory here. The writer can't make everyone happy.

Still, if you want to know what the NFL has been all about for the these past 10 decades, this would seem to be a good starting point. And even if you already know some of those facts, you'll still think of "NFL Century" as a very good retrospective.

Be notified of new posts on this site via Twitter @WDX2BB.
Posted by Budd Bailey at 9:28 AM