By Elgin Baylor with Alan Eisenstock 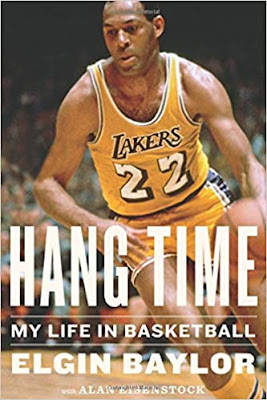 The first time I noticed Elgin Baylor was in 1974, when I was 18 years old. I was in the Basketball Hall of Fame - the old, old building on the campus of Springfield College in Massachusetts. I was old enough to have seen him play, but not old enough to remember how he played when he was in his prime after he turned pro.

The Hall of Fame used to show old basketball highlight films in those days, and my friend and I couldn't get enough of them in those pre-YouTube days. One of them was a highlight film of a particular season. And Baylor was the clear star. He was years ahead of his time, pioneering a game that was played more in the air than on the ground. Julius Erving, David Thompson and Michael Jordan all owe something to this pioneer of hoops.

That was a good lesson, but there are others to be learned from this remarkable player. "Hang Time" provides a good education into his life.

Baylor grew up in Washington, D.C., which was still quite Southern in its outlook on race relations. Every day was something of a battle for African Americans, particularly when they bumped up against established policies. Elgin - yes, named after the watch company after his parents apparently ran out of ideas for names - found an escape route from all that through basketball. Still, there were possible detours along the way. You will be stunned at the reason why Baylor missed the first semester of his senior year of high school, and how the situation was resolved.

From there it was on to junior college in Idaho - Idaho? - and then to Seattle University, where Baylor made the team a national powerhouse. He turned pro and joined the Minneapolis Lakers, who were soon off to Los Angeles. There Baylor put up numbers straight out of video games. He averaged more than 30 points per game for three straight years, including a remarkable 38.3 figure in 1961-62. And he did it with a spectacular style that would have made him a social media favorite had he been born about 55 years later.

Unfortunately, high flying athletes usually get grounded by injuries over the course in time, and Baylor started to have knee trouble midway through his career. His description of his kneecap essentially exploding during a game is still tough to read. But Elgin adjusted, and he was still an effective player through the age of 35.

Baylor comes through with plenty of good stories here about his playing days, told with honesty. The NBA was different in those days, almost a fraternity more than a sports league. Baylor played with and against the top players of his era. His biggest problem was that he was never on a team that could never get past the Boston Celtics and their dynasty of that era. Sadly, it wasn't until Baylor retired that the Lakers finally got that long-coveted title in 1972.

This is frequently told in an unusual first-person style that requires a little time for the reader to adjust to it. The anecdotes are almost always fascinating, although sometimes the story gets a little bogged down in statistical recaps about playoff matchups. The other complaint about the book is that essentially ends after the 1969 playoffs. The 1970 final against the New York Knicks, which was a fascinating and dramatic matchup, only receives a small mention. Baylor also served as the general manager for the Clippers under the team's notorious owner, Donald Sterling. Elgin stayed for 22 years, and he regretted the long stay until the day he died by the sounds of it. Sterling was essentially kicked out of the NBA for being a racist, and Baylor regrets hanging around so long. His reason is that he wanted an African American to have that job, but he writes that he'd take a do-over for that part of his life if he could.

Baylor died in 2021, and after years of prompting it's good that he finally got "Hang Time" down on paper. The kids might not be initially interested in a player from the 1950s and 1960s, but I'd guess that most fans will thoroughly enjoy this trip into a basketball time machine.

Learn more about this book from Amazon.com. (As an Amazon Associate, I earn from qualifying purchases.)