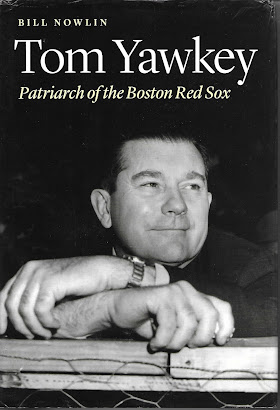 Tom Yawkey always had been something of a man of mystery during his time as an adult. He bought the Boston Red Sox as a young man in the 1930s - when he was one of the few people around who could reach into his proverbial wallet and pull out enough money to buy a baseball team.

Yawkey remained the owner of the Red Sox for more than 40 years, and his wife ran the team and organization  into the early 1990s at the time of her death. That meant the Yawkey name was on top of the organizational chart for almost 60 years - an eternity in professional sports.

Yet not too many people knew a great deal about him. The stories leaked out over the years - the way he worked out during the day in Fenway Park in the summer, the way he acted with generosity toward his players and many others. What we didn't know was, what was he like?

Bill Nowlin, therefore, commits something of a public service by writing the first full biography of arguably the most important person in the history of Boston sports. "Tom Yawkey" is as complete a picture of the man as we're likely to get.

First and foremost, Nowlin appears to have left no stone unturned in his search for information. The ancedotes and facts pile up over the course of more than 450 pages. It's almost as if he did a search for "Tom Yawkey" on Google, and went through the 90,800 current references. Jean Yawkey gets 14,700 hits, and those seem like they were examined too.

The author also interviewed a variety of people who had contact with the Yawkeys. They add good perspective on the later years, although it's too bad this wasn't written in the 1970s when more people from the early days of Tom Yawkey's involvement with the franchise were alive. What we have, though, it still a lot of material.

The biggest question surrounding Yawkey's tenure as Red Sox owner centers on race. He's been gone since 1976, and we're still arguing about it. The debate reemerged in the summer of 2020, when there was talk of renaming Yawkey Way outside of Fenway Park in Boston as something of a "penalty" for his racial record. As many baseball fans know, the Red Sox were the last major-league team to put an African American on their roster - Pumpsie Green arrived in 1959.

Nowlin receives a variety of opinions from various sources. It's hard to be a mind-reader about what Yawkey was thinking in the late 1940s and all of the 1950s. The best guess appears to be that Yawkey was too loyal to his friends to be a top-notch owner, and certainly some executives of the Red Sox qualified as Class A racists. Yawkey could have and should have done more - hiring a black scout in the early 1950s would have been an easy start. But he was from the old school that trusted people to do the right thing - even when they were obviously falling short. The team's won-loss record in that era reflects that. It was only when the "old guard" finally was swept out that the situation began to change. Yawkey also changed his lifestyle along the way, cutting way back on drinking alcohol and eating. It may have help see things more clearly in more ways than one.

When Yawkey wasn't in Boston (watching his team in the summer) or New York (business), he usually was in South Carolina. It's actually rather interesting to hear more about his land holdings in the Georgetown region, which came up every so often over the years but was never really discussed in details. It seems he became something of an environmentalist in his later years, and the area is now a state wildlife preserve - and apparently will stay that way in the indefinite future.

The book has only a couple of obvious flaws. Yawkey's business interests remain somewhat distant. He inherited millions, but we're never too sure where his money was besides securities and "natural resources." The heavy research also leads to choppy writing in portions of the book, and some repetition. It's tough to count how many times we heard about Jean Yawkey watching the Red Sox from her box in Fenway Park, faithfully keeping score and chain-smoking as she looked down on the team. But it was more than enough times to get the idea across. We could have lost at least 50 pages without too much of a problem.

Still, Yawkey becomes more than a cardboard cutout as a personality and turns into an actual person. That makes "Tom Yawkey" worth the read, especially but not only for Red Sox fans, and worth the effort that went into it.