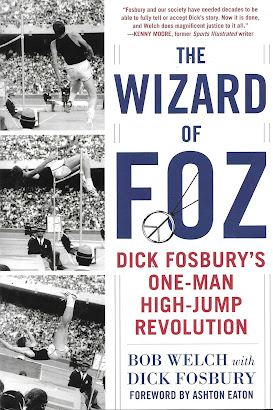 By Bob Welch with Dick Fosbury
If you are going to buy one book on a high jumper, this is the one to get.
On the surface, Dick Fosbury has a great story. His high jump career in high school was going nowhere when he started to work on a completely new way of trying to jump over a bar - upside-down and from a different angle, for lack of a more vivid description. What do you know? It worked. Fosbury rapidly improved almost overnight, and became a top high school jumper.
Then it was on to college at Oregon State, where the improvement continued. Dick soon became one of the best high jumpers in the country, won some meets and qualified for the Olympics. Everyone, it seemed, was fascinated by "The Fosbury Flop" - except for a few coaches. Because, well, we've never done it that way before.
No one had ever won a gold medal that way either ... until Mexico City in 1968. Fosbury stood on the top of the platform that day, on top of the high jumping world and the leader of what became a revolution in his specialty.
Like I said, that's a great story. It wasn't ignored at the time. Now, 50 years later, the full story of Fosbury and his Flop have been published in the form of "The Wizard of Foz." And about time, too.
It turns out the key moment in Fosbury's life was generally kept out of the public view. He was riding a bicycle in Oregon as a youth with a little brother when the two were involved in an accident with a car. Ten-year-old Greg was killed. The 14-year-old Dick felt guilty over that, and felt guilty a while later when his parents were divorced. That's enough to drive anyone into isolation, and Fosbury soon was drawn into a sport that required his mind to shut out the rest of the world and concentrate on the task at hand - even if it only took a few seconds at a time.
I suppose the best analogy about the new approach would be what happened to football kickers. The place-kickers also approached the ball from directly behind. Then Pete Gogolak showed up at Cornell, kicking "soccer-style" - from an angle. He had success, signed with the Buffalo Bills, and had more success. Eventually, everyone was kicking from the side.
In recounting this tale, Welch takes a slightly unusual approach. He starts with the complete cooperation of Fosbury, who reviews his life in high jumping as well as his thoughts along the way. But it's not written as a "as told to" book. Welch talks to relatives, friends, competitors and coaches along the way. That gives the story a great deal of depth, since the reaction of the outside world is part of the fun - and Fosbury really had no idea what was going on around him. It's quite seemless.
And what was going on was a revolution. The world looked at Fosbury hopping over the bar and into the pit with out-and-out glee. Every kid no doubt at least tried to jump into a couch or sofa that way in an effort to mimic. Many stuck with it. It only took a decade or so for the flop to replace the straddle as the preferred way to high jump. It turned out that jumping that way had its physical advantages for the right type of athlete, but only Fosbury could muster the leap of imagination and the determination to pull it all off. We salute people who think "outside the box," but sometimes it takes a while.
There's only one complaint to make about the book. The year 1968 certainly was an eventful one in American history, and the author brings in a lot of references to it. Some of it is necessary, particularly because some African Americans decided to boycott the 1968 Games while others - notably John Carlos and Tommie Smith - made their statements at the event. Some of the other history lessons don't work quite well. The rules were changing in society in that era, but I'm not so sure that those alterations has much to do with Fosbury's breaking with tradition. It's more of a case that he was willing to experiment and find something that worked.
Still, it was easy to root for Fosbury then, and it's easy to root for him today. Stories of a revolution are always interesting, and "The Wizard of Foz" works extremely well in explaining what happened.
Four stars
Learn more about this book.
Be notifed of new posts on this site via Twitter @WDX2BB.
Posted by Budd Bailey at 4:54 PM