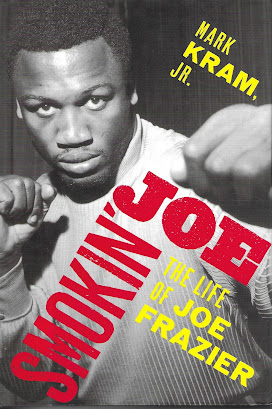 In individual sports, the great ones often need a talented rival to show just how good they really were. Jack Nicklaus needed to surpass Arnold Palmer before becoming the greatest golfer in history. In turn, Tom Watson had to slip past a slowly aging Nicklaus to grab the full spotlight. In tennis, Pete Sampras had Andre Agassi waiting for him, Roger Federer needed Rafael Nadal for inspiration, and Martina Navratilova and Chris Evert needed each other to take their games to new heights.

Such can be the case in boxing too. How do you think Muhammad Ali became the greatest of all time? It wasn't because he knocked out Henry Cooper and Joe Bugner. It took some special people for Ali to raise his level of artistry in the ring to heights that even he didn't know he had.

Certainly Ali scored points by knocking off Sonny Liston and George Foreman - two "bullies" who looked unbeatable at the time when they ran into Ali. But when it came to digging deep, no one did it better for Ali than Joe Frazier. Their three fights were classics, both men came out of the trilogy much worse for wear but as legends.

It's good, then, that Mark Kram Jr. has given Frazier the full biography treatment in the book "Smokin' Joe." Kram has done a good job with it too.

The story essentially starts out very nicely. Frazier spent his early youth in rural South Carolina, and Kram does a fine job of recreating what life was like there - which is to say, difficult. There's no poverty like rural poverty, especially for African Americans before the 1960s. Frazier was shipped off to live with relatives in New York at a young age, and was on the verge of becoming another broken soul on the road to nowhere as a teen.

But then he found boxing, which was a good distraction for Joe as opposed to life on the streets. He put in the necessary work with a dedication that he probably didn't even know he had, and was good at it. When you fought Smokin' Joe, you didn't have to go looking for a fight. He'd be right there, willing to take three punches to get one good one in. It led to a gold medal, which led to a pro career, which eventually led to the heavyweight championship.

The centerpiece of the book obviously is the first Ali-Frazier fight, which really was the fight of the century. Ali had lost his title despite an undefeated record when he refused to enter the Army. Frazier was essentially the replacement. When they did fight in 1971, it was essentially a fight between undefeated champions - and that set of circumstances caught the attention of the world. Ali may have been a little rusty after only two tune-up fights, but the moment wasn't too big for Frazier. That last part was important

Joe had his ups and downs the rest of the way. He was no match for Foreman the night he lost his title. Styles make fights, and Frazier knew no other way to come in slugging. Joe just went back to work, winning most of his bouts. No defeated combatant in modern boxing history brought more honor to himself than Frazier did in "The Thrilla in Manila," the third bout with Ali. Both men gave it everything they had; Ali famously said it was the closest thing to death he ever experienced. Kram does some great work amplifying a point about the bout that hasn't received much attention. Frazier was essentially blind in one eye going into the fight because of cataracts, and probably shouldn't even have been allowed in a boxing ring.  When the other eye was swollen shut by Ali's punches, Frazier couldn't see a thing ... but it took his manager's decision to stop the bout.

Joe certainly had some issues later in life. While his former management team did its best to set Joe up for life financially, Frazier was a little too generous for his own good and had some expensive tastes. You wouldn't expect someone growing up poor with little education in Beaufort, South Carolina, to be a whiz at money management. At least he never hit bottom. Joe also believed in most of the commandments, but had a bit of a zipper problem. It's not easy to sort out all of the children that Joe fathered over the years, and it's a little confusing to follow them all in the book. Kram did his best, though, although there's a little jumping around in this section.

Then there was his relationship with Ali. Most of us wanted the two men to be pals instead of rivals once their careers ended, sort of like Ralph Branca and Bobby Thomson, or - more to the point - Ali and Foreman. Ali had crossed a few lines with Frazier with his words during their common era, and Frazier took it personally.  For years, Joe seemed to be carrying that hate with him - although the degree of anger seemed to depend on the day and the situation. Kram isn't sure what Frazier's attitude was on the day he died, but he did come across a story which gives people a reason to think that happy endings are possible and that man's capacity for forgiveness can be underestimated.

By the way, Kram is the son of the late Mark Kram (Sr.), who gained some journalistic fame mostly as the boxing writer for Sports Illustrated during the Ali/Frazier era of boxing. There are a few odd references to "my father" in the book, but it's difficult to complain to much about a son's pride in the work of his dad.

Muhammad Ali was like the sun, shining light everywhere in the solar system. Joe Frazier was more like one of the planets, obscured at times by the blinding light of the sun but still full of interesting stories. "Smokin' Joe" gives Frazier his due nicely, filling in a gap in the boxing library. And his fans ought to love it.