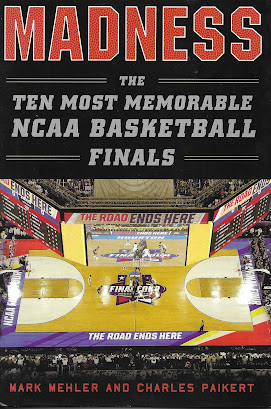 By Mark Mehler and Charles Paikert
Veteran college basketball fans probably looked at the cover of this book and thought, "I probably could write this."
After all, they thought, how hard is it to come up with a list of the 10 best finals in NCAA basketball history? Recap the games, add background on the seasons of the two teams, and - presto - you have a book.
To a certain degree, "Madness" is that book. The difference, though, is that Mark Mehler and Charles Paikert did their homework when it came to putting this altogether.
The potential for arguments starts with the list itself naturally. They have been playing NCAA tournaments since 1939. The authors say they used four standards for choosing the top 10: quality of play, influence, significance and personalities.
It's interesting, then, that only one of the selected games took place since 1990 - Duke vs. Butler in 2010. In fairness, there is an honorable mention list, and 2016 (Villanova), 2008 (Kansas), 2003 (Syracuse), and 1993 (North Carolina/Michigan) are on it. It's interesting to note that the 2010s weren't a great decade for finals. Come to think of it, we haven't had a particularly great century.
Sometimes, of course, the biggest games in a given year aren't played in the final. For example, Duke defeated UNLV in the semifinals in 1991, and the Blue Devils and Kentucky may have played the best game ever in 1992 ... in the regional final.
You probably could argue that some of the honorable mention games could be moved up. However, the 14 games covered here are a more than fair list. The only one that might come to mind is Cincinnati's overtime win over a memorable Ohio State team (Lucas, Havlicek, etc.) in 1961. And the Bearcats repeated it a year later, so maybe it wasn't that significant.
The authors reached out to as some of the participants in order to gain some perspective on that particular game. They also read all of the available books and watched game videos and documentaries. Since most of the games are at least 30 years old, everyone involved has a good sense of perspective on what that game meant. That helps the authors put the game in context.
This is an easy book to read; you can plow through the 230 pages relatively quickly. "Madness," then, will provide some good memories if you watched the game, and add some insight into your understanding of what happened if you didn't. The book therefore succeeds in its goals nicely.
Four stars
Learn more about this book.
Be notified of new posts on this site via Twitter @WDX2BB.
Posted by Budd Bailey at 9:15 AM