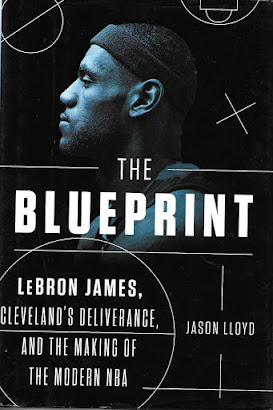 By Jason Lloyd
It's the most obvious rule in the book of sports publishing. A team wins a title in a major sport, and you put out a book about it. It could be a story all about the tick-tock of the season, or it could be a picture book. But it gets done. (If it happens in New York, you put out a dozen - because NYC-based publishers think they'll sell.) But no matter where it happens, people want to read about a memorable season.
This certainly applies to Cleveland and the 2016 Cavaliers. The city hadn't celebrated a title since the 1964 Browns, a 52-year wait.
The historic victory prompted Jason Lloyd to get to work. He had been covering the Cavaliers, one way or another, since LeBron James originally left the team as a free agent in 2010. That gives him the perspective and the knowledge to come up with plenty of good information in writing "The Blueprint."
The Cavaliers obviously were shell-shocked when James made "The Decision" to jump to the Heat in 2010. Owner Dan Gilbert issued a public statement about the departure that was inflammatory at the least. A reunion didn't seem possible, but Lloyd writes convincingly that the organization never gave up on the idea of bringing James back to Cleveland. The hard feelings from James' side slowly went away, and the Cavs went about the business of trying to set up their roster in order to make it possible for the team to win if King James did indeed stage a second coming to Cleveland.
Luck was on the Cavaliers' side, since they won three lotteries to obtain the first overall draft pick within four years. They were also lucky that Kyrie Irving was available on one of those years. They were also unlucky that the 2013 draft class was a bad one, and they were stuck with several less-than-helpful options in their selection. Anthony Bennett wasn't much help in Cleveland, but he became a piece in the acquisition of Kevin Love later in the story.
The first half of the book leads up to the day when James announces he is returning to Cleveland, which meant all was forgiven when it came to the original separation. The player, the organization and the fans all regained their enthusiasm about the merger. There were some growing pains in those two years, relatively speaking, but everyone got it done.
General manager David Griffin sent out an email to members of the Cavaliers after the team had fallen behind the Golden State Warriors, three games to one, in the 2016 NBA Finals. He said the team had made plenty of history already, so it would be only fitting to be the first team in league history to come back from a 3-1 deficit in the Finals to win. That's exactly what happened. It's easy to think of the 2004 baseball season for an analogy. The Boston Red Sox hadn't won a title in 86 years - something that always hung over them during that drought. But when they fought back from a 3-0 deficit to set up a Game Seven with the New York Yankees, the pressure was suddenly equalized. Boston won Game Seven and eventually a title.
Lloyd brings up plenty of good stories along the way. For example, the departure of David Blatt as coach in midseason seemed like a curious move from a distance. Lloyd dug out plenty of stories that indicate that the Cavaliers were winning not because of Blatt's work, but in spite of him. The front office apparently agreed with that assessment, showing him the door midway through the 2015-16 season in favor of assistant Tyronn Lue. The Cavs won the title under Lue, so it worked out well for everyone but Blatt.
Books that review championships are a little tough to review from a distance. In this case, I know the basics of the story but not the details - a disadvantage when compared to the residents of Northeast Ohio. Therefore, most of the information here is fresh and well-presented for me. For those in the Cleveland area, they might know more but they'll also have memories of the games in question - it's always good to relive those. Even so, most probably will learn some things along the way.
Add it up, and it's difficult to believe that "The Blueprint" could have been done any better. Future authors of books on championship teams should use as, yes, a blueprint on how to do it right.
Five stars
Learn more about this book from Amazon.com.
Be notified of new posts on this site via Twitter @WDX2BB.
Posted by Budd Bailey at 11:39 AM