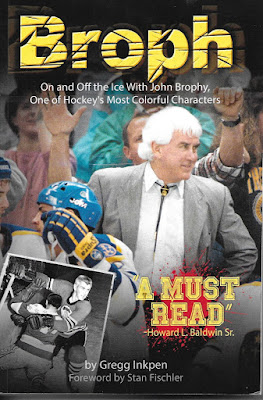 There aren't many "underground" sports legends these days. In a world with social media and cameras everywhere, no one who acts outrageously can be anonymous for long.

It wasn't always that way. Let's take the world of hockey, in which the low minors played almost a different sport than their major league counterparts. The stories still circulate about on-ice incidents, and about off-ice actions that involved fans. Life in the Eastern Hockey League and the North American Hockey League were something out of the Wild, Wild West. Play at that level was much like the movie "Slap Shot."

There weren't many Paul Newmans involved in those games, but there was a man from those times who is still something of a legend. Author Gregg Inkpen tries to sort out the facts from fiction in his book, "Broph," about John Brophy. It's a self-published effort that probably could have used a little more editing, but it tells quite a life story along the way.

It's not exactly easy to sum up Brophy in a few paragraphs here. He came out of Nova Scotia and was one of those guys who loved hockey so much that he'd do anything to stay involved in it. "Anything," as defined in the minors of the day, meant be a tough guy. Brophy spent 18 years in minor hockey as a player, retiring at the age of 40 after running up almost 4,000 penalty minutes in the process.

The defenseman had his share of incidents along the way. He wasn't suspended after every game, but it sounds at times as if it wasn't a matter of a lack of trying. There are plenty of tales here about referees getting knocked down and coaches getting hit and chairs being thrown at fans. Quite clearly, Brophy was a man who certainly had some self-control problems in certain situations.

What do you do with a man like that when his playing days are over? Make him a coach. Of course. The ride continued for many more years behind the bench, with more problems with authority figures, among others. He tried to make sure his team was tough enough to encounter any foe in the physical sense, and usually succeeded.

And he won. Brophy won more than 1,000 games in his long career, using methods that dated back to the Eddie Shore era - who famously tied a rope around his goalie in practice so he wouldn't wander away from the net.

Brophy had one big chance to escape urban legend status. He somehow became the head coach of the Toronto Maple Leafs, in part because he got along with owner Harold Ballard. Brophy didn't win there, but nobody won in Toronto in the 1980s because the organization was under perpetual chaos under Ballard. After the inevitable firing, Brophy had an 11-year run with Hampton Roads of the ECHL - and never had a losing season.

Inkpen deserves great credit for tracking down information here. Plenty of people have stories about Brophy. If John Muckler ever writes an autobiography, he'd probably make sure than a third of it was about dealing with Brophy in the ECHL. He loved to talk about him. (Wayne Gretzky and Co. would get another third, and the rest of his life would finish it.)

The book tries to offer a balanced look at Brophy, and there are plenty of stories about how he wasn't always a maniac. He would help out a young player, quietly help out someone in financial need, or buy Thanksgiving turkeys for the underpaid staff. Fine. Even so, you'd probably need a psychologist to figure out Brophy's behavior - which in the day probably was no joking matter to most and today would even be less tolerated than it was.

I can tell you the portion of the book where Brophy lost me. There's a story from his coaching days in Canada where a child with disabilities turned up in the team locker room - just when Brophy was upset about something. Between obscenities, Brophy kicked the child's wheelchair, pushing him out of the locker room and into a wall. Then the coach trashed the weight machine and broke every stick in sight.

What sort of person does that? It's hard to say, but it would be interesting to know if someone had tried to figure out where all of the anger came from. A little more analysis from those around Brophy might have helped shape a better picture of hm.

"Broph" is not a pretty picture, then. The evidence is simply presented, and it's up to us to sort it out. It is easy to appreciate the work went into this, though. And if you like stories about old-time hockey, you'll find this entertaining.

Be notified of new posts on this site via Twitter @WDX2BB.
Posted by Budd Bailey at 8:15 PM