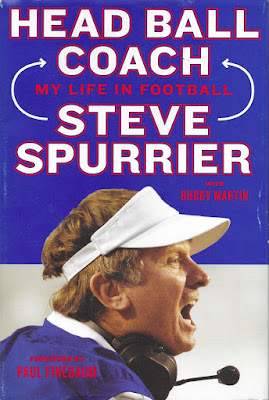 By Steve Spurrier with Buddy Martin

Football coaches sometimes are the dullest people in sports.

They are the ones who brag about how many hours in a day they work, who never say anything interesting, and don't have much of a life outside the 120-yard playing field.

And then there was Steve Spurrier. Say what you want about the Head Ball Coach, but he wasn't dull.

Spurrier liked having fun on the field, and what's more fun than scoring points? He unleashed offenses wherever he coached, and the results followed: several conference titles, and a national championship.

What's more, he had some fun along the way. Spurrier put it plenty of hours, but wasn't above sneaking off to the golf course for a while when he had some down moments. The veteran coach even liked to take a day or two off when time permitted during the season (perhaps during a bye week) and recharged his batteries.

Spurrier wasn't above throwing a few funny quotes at the opposition. For example, when Florida State had a bit of a scandal involving its players and footwear, Spurrier said FSU now stood for something else: Free Shoes University.

Those qualities come out in "Head Ball Coach," an autobiography written shortly after his retirement from football in 2015.

Spurrier had a rather charmed life when it came to football for the most part. Florida wasn't much of a team when he arrived as a player in the 1960s, but he did more than his share to turn that around - winning the Heisman Trophy as the nation's best player. That earned him a spot as a No. 1 pick of the San Francisco 49ers ... where he sat as the backup quarterback to John Brodie for most of his career.

All that sitting gave him time to learn about the game and ponder his future, and when his playing days were over he smoothly moved into coaching. Spurrier climbed the usual ladder, which included a stop in the United States Football League with Tampa Bay. He actually won games at Duke - no small accomplishment at the time - and moved on to Florida. Spurrier turned the Gators into national powers. As you'd expect, there are plenty of stories about his days there.

After going 122-27-1, Spurrier decided he wanted a new world to conquer and accepted a job as head coach of the NFL's Washington Redskins. He found out the hard way that pro ball wasn't so easy to dominate, particularly when the owner is Daniel Snyder. The chapter is about that stop in Washington is quite brief, and tossed aside as if Spurrier doesn't really want to go back there mentally. That might be the biggest disappointment in the book.

Then it's on to South Carolina. There were no national titles there, but the Gamecocks won plenty of games and made bowl appearances during Spurrier's ten-plus years there. He left when he felt like he wasn't doing a good enough job - in midseason, which is rare enough to be interesting.

The book is something of a goodbye to a successful part of his life. Spurrier hands out plenty of credit to the players and coaches he encountered along the way. His family gets its own chapter at the end; the wives of football coaches all should be candidates for sainthood. There are a great many games and scores that get the once over here. That may work for big fans of Spurrier, who followed his career closely, but it's a little tougher to be involved in the tale for those who watched from a distance. A few coaching tips and philosophical thoughts are thrown in for good measure.

"Head Ball Coach," then, is a pleasant enough is a bit guarded read, and his fans in Florida and South Carolina certainly will enjoy hearing about the big wins from the past. Whether others will find it compelling is another story.

Be notified of new posts on this site via Twitter @WDX2BB.
Posted by Budd Bailey at 1:12 PM