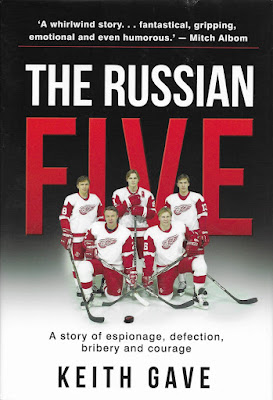 "The Russian Five" starts in a very unusual way for a sports book. Author Keith Gave goes back in time almost 30 years to 1990 when two Soviet hockey players found out in Helsinki that they had been drafted by the Detroit Red Wings.

The catch is that Gave, a hockey reporter in Detroit at the time, was the person who told them.

And then it gets better. Gave handed Sergei Fedorov and Vladimir Konstantinov some materials that included a Red Wings media guide ... and a handwritten note by Gave in Russian that said the Red Wings were ready to offer both of them large contracts (by the standards of the day - $250,000 per year) to come to the United States and play hockey in Detroit.

That started the wheels in motion of something of a hockey revolution. Those changes also included political ones, as the relationship between the United States and Soviet Union/Russia changed drastically as the Cold War between the countries came to a close in the early 1990s. The hockey revolution, in a sense, when the Red Wings - with five Russian players playing key roles - won a Stanley Cup in 1997 for the first time in decades.

That's quite a story, and Gave gets to tell all of it at length in his fascinating book, "The Russian Five."

Gave's route to becoming a hockey writer was an unusual one. He had joined the National Security Agency earlier, where he learned the Russian language and was part of a monitoring service in West Germany. Therefore, he was in the right place at the right time to serve as the go-between in the story that reads something out of a spy novel. Fedorov defected in 1990, following his linemate Alexander Mogilny who left the Soviet Union in 1989 to join the Buffalo Sabres. Konstantinov needed some serious help to get out of the USSR, which included doctors signing statements that the talented defenseman was dying of cancer. (Yes, good old American cash help lubricate the process.)

Eventually, those two players had company in the form of comrades. Slava Kozlov was another Red Wings draft choice. He came close to defecting before 1991, and it took some behind-the-scenes maneuvering to get him to Detroit.

The final two pieces arrived in the form of Slava Fetisov and Igor Larionov. Those two were veterans who were considered all-time greats but perhaps a little old. They were acquired in trades with New Jersey and San Jose respectively. Coach Scotty Bowman opted to put the five players from Russia together on the ice at times, and the result was almost magical. Not only did the Red Wings win a Stanley Cup thanks to the "Russian Five" in 1997, but the "foreigners'" style of play changed North American hockey forever after a while. Today we see a sport that resembles the style of the great Soviet teams that dominated international play from the 1960s through much of the 1980s - with only a few exceptions, like in Lake Placid in 1980.

The early chapters of the book are absolutely fascinating, as cloke-and-dagger stories usually are. it would be difficult to match that the rest of the way, and the story falls off slightly once everything is in place. The book turns into a tale of the rise of the Red Wings to become champions, only to receive a terrible shock once they reach that pinnacle.

Gave apparently was part of a documentary done a while back that reviewed the story. He has first-hand material from the time it all happened, of course, but has the advantage of using interview material from 20 years after the fact that provides additional stories and valuable perspective.

Here's an example of the effect this story of hockey and cultural history can have. Once the 1997 Stanley Cup was won, captain Steve Yzerman took a spin around the rink with it - and then handed it to Fetisov. The defenseman then called Larionov over, and the two skated around Joe Louis Arena together with the last remaining prize to be won their brilliant hockey careers. After reading about the emotions of the two players, I headed to the computer for a bit to watch the scene on YouTube. Great stuff.

The only complaint here is a small one in the form of editing - some stories get told more than once, and the jumps in the book's time line may confuse some a times. Still, the best sports books are the ones in which more than sports are involved. "The Russian Five" will touch all sorts of buttons to all who read it.

Be notified of new posts on this site via Twitter @WDX2BB.
Posted by Budd Bailey at 4:58 PM