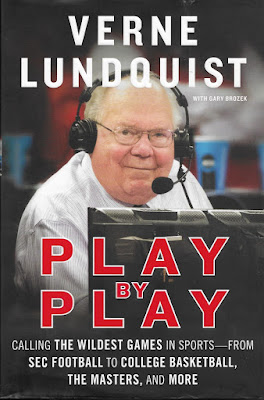 By Verne Lundquist with Gary Brozek

The best announcers are the ones that the listeners grow comfortable to their voices.

They are the ones that clearly know their business, handle everything professionally, and know when to talk and when to keep quiet.

That's Verne Lundquist in a nutshell. He carved out a mighty fine career in the broadcasting business for several decades. After retiring, it was clearly time to write down some of his memories.

It turns out he's pretty good at that too. For proof, see "Play by Play."

Lundquist started his career at a radio station in Austin, Texas, owned by Mr. and Mrs. Lyndon Johnson. You may recognize the name of the 36th President of the United States there. Virtually every announcer in the business has to pay his dues, and Lundquist did that. But soon he was working on the broadcasts of the Dallas Cowboys, and soon after that the networks came calling.

Eventually Lundquist landed a spot at ABC for a few years, which eventually turned into a spot with CBS. That's where Lundquist became part of the furniture. Remember when Jack Nicklaus birdied No. 17 on the final day of the 1986 Masters? That was Lundquist with the emphatic "Yes, sir!" description. How about the fabled Duke-Kentucky basketball game in 1992, which is merely the greatest game in that sport ever? Or Tiger Woods' chip-in on No. 16 in the 2005 Masters? Or the 2013 Auburn-Alabama football game that ended with a 109-yard return of a missed field goal for the winning score? Lundquist was working all of those moments. That's a pretty good run of once-in-a-lifetime events.

That doesn't even include the figure skating shootout involving Nancy Kerrigan and Tonya Harding at the 1994 Olympics. It's surprising to read that Lundquist absolutely loving doing that sport on television, particularly when working with Scott Hamilton. Verne even did some work on "Bowling for Dollars," which ought to stir the hearts of those who remember it from the 1970s.

As you'd expect, there are some worthwhile stories about some of the personalities that Lundquist encountered along the way. That includes broadcast partners such as John Madden, Gary Danielson, Terry Bradshaw, Bill Raftery, and Al McGuire for starters. There are even some tales about athletes and coaches encountered along the way, but not too many.

About the only place that in the book that bogged down for me was the part about some of the memorable games he called involving Southeast Conference football teams. Those contests shouldn't be downgraded, of course, as they involved some great teams and players. And they helped establish Lundquist as one of the top voices in the sport, something of a successor to Keith Jackson. Still, the matchups do blur together at this point; even Lundquist had to go back and do some review work.

"Play by Play" doesn't require a great deal of thought. Just sit back and relax while reading it, and you'll probably swear that you can read Lundquist reading it to you. It's a fine way to spend some leisure time.

Be notified of new posts on this site via Twitter @WDX2BB.
Posted by Budd Bailey at 3:53 PM