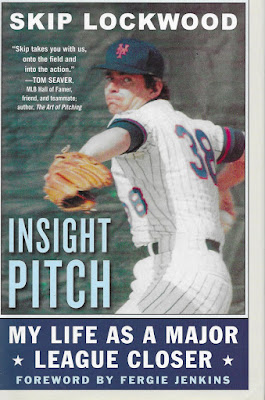 So why would you expect him to write anything close to a typical memoir about his career? You wouldn't. And he didn't.

Lockwood has taken a look back at his baseball days in "Insight Pitch" - even though he retired almost 40 years ago. His career requires some initial explanation here.

Lockwood was one of the last of the bonus babies. He came out of a Massachusetts high school in 1964 at just the right time, in the sense that Major League Baseball was headed toward an Amateur Draft the following year. Therefore, he was part of the last class that could be the subject of a bidding war for prospects. Lockwood signed a $135,000 contract with the Kansas City Athletics, a team that was buying as many good players as possible as part of a rebuilding program.

The catch was that Lockwood started his career as a third baseman, no matter what the subtitle of the book says. The Athletics were a little dysfunctional in those days, and Lockwood bounced around that organization a bit with no particular plan. By 1966 he was given a chance to be a pitcher, since he had taken the mound at times in high school. Lockwood made the majors that way, although he bounced around a bit.

Finally he landed with the Mets in 1975, and found his niche: closer. Oddly, there's not much material here about those best years. Lockwood held that job through 1979, and jumped to the Red Sox - his hometown team in a sense - in 1980. There he suffered a shoulder injury that ended his career.

That brings us to the book. It mostly contains stories about key moments in his career, and after a couple of early tales he eventually goes through his career in something close to chronological order. There are a few stories about others - including Tom Seaver, Yogi Berra, Charley Finley, Jim Hunter, etc.. - but mostly they center on Lockwood and what he was feeling at the time.

The writing style is not exactly in your face. It's closer to flowery in that it is very descriptive. Your reaction to that may vary, but a thought does go through the mind that this is quite detailed for events that happened over 40 years ago - and in some cases, more than 55 years ago. That probably explains little slip-ups along the way, such as hearing a sports talk show and the Beatles on New York City radio in 1962 - when both of those items were still a couple of years away.

Still, Lockwood gets the point across about what his feelings were at certain moment in his career. What's it like to walk into a major league clubhouse for the first time? To throw at an opposing batter? To work with a team employee who hates you just for being you - a young kid with talent from the North?

Lockwood went on to get a couple of degrees, and still does some work at sports psychology. Maybe he wanted to get his memories down on paper while he could. In any event, "Insight Pitch" has its moments, but it's too bad that it wasn't written much sooner. But one more point is necessary: Those that find this book in the publishing universe who enjoy a liberal sprinkling of words in their baseball writing probably will enjoy it.

Be notified of new posts on this site via Twitter @WDX2BB.
Posted by Budd Bailey at 11:05 AM