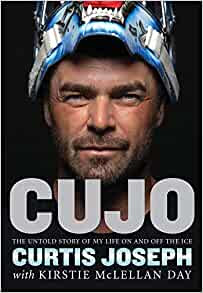 Hockey fans might know about Curtis Joseph's exploits on the ice, but they may have no idea on what he sort of odds he overcame to reach the National Hockey League.

"Cujo" - by Joseph with Kirstie McLellan Day - fills in that huge gap fully. It's an amazing story.

Joseph was born to a pair of unmarried teenage parents, and he was put up for adoption shortly after that. A friend of the mother took him in and raised him with her husband for most of his childhood. It wasn't easy for all concerned. There was no money for anything in a less-than-nuclear family (other children with various combinations of parents were around as well).

Curtis spent part of his youth in a group home that his mother was working in, sleeping on the floor and keeping an eye out for other residents. Sports sometimes is called "a way out" for such kids, even if counting on such an event is a long shot. But Joseph took up hockey after displaying an interest and ability in athletics, and he separated from his family as a teen. You don't read too many stories like this, so give him all sorts of credit for rising as far as he did.

Once Joseph's story settles in on his days as a goalie, it becomes a rather typical sports biography. He worked his way up the ladder, a few steps behind the rest because of his late start, and spent a year at the University of Wisconsin. That put him on the NHL's radar, and he signed as a free agent with the St. Louis Blues.

What he did from there is very impressive from a hockey standpoint. Joseph worked his way through six teams (including two stops in Toronto) and played 19 years. He did not win a Stanley Cup, which might be a reason why he's not in the Hall of Fame yet. But that should happen at some point, since he is among the NHL's all-time leaders in several statistical categories.

There are a couple of oddities about the presentation of this book. There aren't many life stories with 74 chapters in it. That makes it a little choppy to read, and some jumps between subjects probably don't help much either. Meanwhile, there are good-sized descriptions of virtually all of his teammates over the years. There are no scores settled here; Joseph has good words to say about everyone. That sort of positive approach certainly can be admired, but it's a bit difficult to believe they all of those players were such good people. Maybe since he's tough on himself, Joseph has trouble commenting on teammates. A more nuanced approach might have worked better.

Those aren't huge drawbacks, especially for those who enjoyed Joseph's work on the ice. If the idea of an autobiography is to tell what the author is like and why he turned out this well, "Cujo" succeeds quite well. It's easy to be happy that he achieved success in a game he loves.

Be notified of new posts on this site via Twitter @WD2BB.
Posted by Budd Bailey at 6:04 PM