Review: The Incomplete Book of Running (2018) 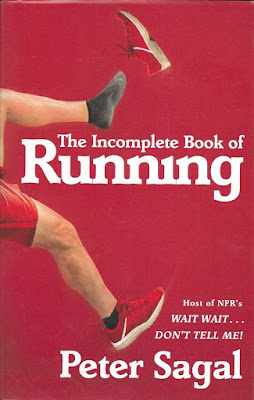 It's difficult not to be a fan of Peter Sagal.

He's best known as the host of "Wait, Wait ... Don't Tell Me" on National Public Radio. It's something of a comedy quiz show that mixes the quick wit of Sagal - he really makes the show work - with some smart "contestants." Sagal also has written a column for Runners' World magazine, with his stories about his exploits and experiences on the road. He's funny there, too.

If you check off the listener box and the reading box when it comes to Sagal's work, you no doubt will at least want to glance at his book, "The Incomplete Book of Running." And yes, the title is a take-off of the best selling book from a few decades back (1977, to be specific), "The Complete Book of Running" by Jim Fixx.

Sagal has been running long distances on and off for years, and this is essentially a collection of his running stories and wisdom. The good news is that he knows his way around a joke, and displays that ability here throughout the book.

The most space in the book that is devoted to one subject covers a couple of Sagal's runs in the Boston Marathon. The first one came when he volunteered to guide a runner with visual issues on the 26.2-mile jaunt in Eastern Massachusetts. That would be quite a moving experience on its own. The catch is that the year he first did it was 2013. That was the race when bombs went off near the finish line. Sagal had crossed that line about five minutes before the explosions. He and his partner weren't hurt, but he had quite a story to tell.

A year later, Sagal was back - guiding another runner along the course while showing that a terrorist attack wasn't going to stop him from running. Good for him.

There are other stories here, of course - of other marathons and other races, training schedules, digestive problems, running as a "bandit," and working as a race volunteer. And that's just the running part. Sagal also writes about how his personal life affected his running. Earlier in the decade he went through what sounds like a rather messy divorce with three daughters caught in the crossfire. Sagal also has suffered from depression. This serves to remind us that if you want to trade lives with someone relatively famous, maybe you ought to do a little research about what you are getting yourself into. Happily, Sagal soon became involved in a new relationship, and medication apparently has helped with the depression (when he remembers to take it).

After reading this book - and it doesn't take long to go through its 185 small pages - the question becomes, "Is it worth reading?" That's tougher than you might think.

The biggest flaw is that this is rather disorganized. The writing is broken into chapters, but I can't say there is a unifying theme to most of them. We bounce around from topic to topic in no particular order. It's also a surprise that others are mentioned more often. Yes, it is his book, but relating more experiences from others might have made some points too and come off as a little less self-indulgent.

Based on the reviews, plenty of people felt inspired to put on some running shoes and open the door outside after reading this. If so, good for them. Sagal at least jokes his way through the book, as the material like that can get ponderous rather quickly.

"The Incomplete Book of Running" will put a smile on your face, perhaps when you need one when you are going up a hill after running several miles. It's easy to wish, though, that it was a little bit better.

Be notified of new posts on this site via Twitter @WDX2BB.
Posted by Budd Bailey at 5:57 PM