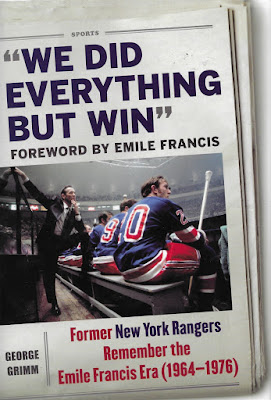 It's not easy to be a fan of a very good but not great team.

It's sort of like knocking on the door for a long time, and no one answers.

The New York Rangers of the late 1960s and early 1970s were like that. After years of serving as plankton to the National Hockey League's whales, the Rangers finally got their act together around 1964 when Emile Francis came in as general manager and coach.

It started a run of about a decade in which the Rangers were frequently Stanley Cup contenders, which sounded mighty good to the team's loyal fan base that had endured years of suffering with little hope. Those boosters are clearly the target of "We Did Everything but Win."

The formula for such oral histories is a rather simple one. Find the people involved, let them talk into a recorder, add some background information, and - presto! - you have the makings of a book. Author George Grimm, a veteran Rangers' fan and sometimes hockey writer, obviously had the chance to talk with Francis for long periods of time, and his comments are the centerpiece of the book. The former GM/coach has a great memory for what happened during his time in New York, and he has plenty of good stories.  Some of the key games, personalities and player moves come alive nicely here.

The list of players quoted here is a long one - everyone from Phil Goyette and Earl Ingarfield to Walt Tkachuk and Brad Park. There are some stars missing for one reason or another, but we still hear plenty about such players as Harry Howell, Jean Ratelle, Ed Giacomin and Rod Gilbert.

Grimm concludes - with the help of some other people's opinions - that the Rangers just didn't have the star power to compete some of the league's best teams in that era. I might go a step farther than that. The Cup winners of that era included the great Montreal squads of the late 1960s, the Boston Bruins with Bobby Orr and Phil Esposito in the early 1970s, and the back-to-back Cup winners in Philadelphia in 1974 and 1975 (led by Bernie Parent and Bobby Clarke). There usually was someone better in the Rangers' way. That happens at certain times in sports history. For example, the Buffalo Bills of the NFL lost four straight Super Bowls, but the only time they might have had the better team was the first one in 1991.

There are a couple of flaws here. A little more editing would have been nice. A few stories get repeated along the way, and some of the quotes could have been edited down a bit to improve the flow of the story. The game and season descriptions were rather dry; the latter could have been replaced by a table or two quite easily.

It's been 50-plus years since some of the people in "We Did Everything But Win" were skating around Madison Square Garden. Therefore, the demographic for the book is shrinking fast. But for those who remember those very good teams, this will bring back some good memories - which will cover a few shortcomings.

Be notified of new posts on this site via Twitter @WDX2BB.
Posted by Budd Bailey at 2:26 PM