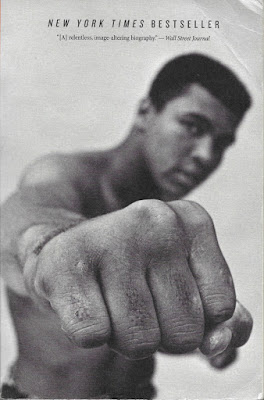 Go ahead. Just try to explain in a relatively few words the life and times of Muhammad Ali to someone who knows nothing about it (probably a youngster, who missed all the fuss).

It can't be done. Ali became an almost mythic figure over the years, with enough twists and turns for a dozen men. He went from national hero to national villain to beloved figure in that time - no small task.

It takes a top-notch writer and reporter to try to point out the highs and lows and inconsistencies in this complicated life. Luckily, Jonathan Eig is up to the job

Eig, whose biography of Lou Gehrig brought him a ton of acclaim, was frequently told by Ali associate Gene Kilroy, "You've got a big responsibility here. Don't screw it up." He didn't. We're unlikely to see a better account of this man's life than in "Ali: A Life."

Eig starts the review of the boxing champion's life in Louisville, a city right on the edge of the South and North if you consider the Ohio River the line. Louisville wasn't Alabama, but it still could be a tough place for a young African American to grow up in the 1950s. The then-named Cassius Clay appeared to be on a track to nowhere as a kid until he took up boxing - and was really, really good at it. Schoolwork didn't interested him, but even in high school it was obvious that young Mr. Clay was going places. The principal of that high school convinced the rest of the administration that he didn't want to be the person that didn't give Clay a diploma, since history wouldn't be kind to that person. It's the type of anecdote that really hooks the reader.

Clay went on to become Olympic champion in 1960, then rose up the pro heavyweight ranks as someone who was impossibly fast and fit for a man his size and impossibly handsome. Virtually no one thought Clay could beat Sonny Liston, the heavyweight champ at the time of 1964 and a thug with mob connections who was considered something like "the bogeyman of his time." Then came the week that everything changed. Clay beat Liston when the champ chose to sit on his stool rather than come out and fight. Hours later, Clay announced an association with the Nation of Islam  and said he wanted to go by the name of Muhammad Ali from that point on.

Eig smartly points out that for a young man from the South, Christianity hadn't offered a great deal to Ali. There were still places in his own country he couldn't visit. The catch was that Islam wasn't well understood in the United States, particular this part of it which talked about complete segregation of the races. Mr. Ali was an even better fighter than Mr. Clay, and he taught us a few lessons along the way. One was that "You should call me the name I choose to use." Another was "I don't have to be what you want me to be." Eig quotes several sportswriters who didn't agree with that last statement, as they thought their sports heroes had to act in a specific way. They look really silly today.

This all came to a head when Ali was drafted, and refused induction. "I ain't got no quarrel with them Viet Cong" eventually became his best-known quote, as it spoke to many who wanted to end America's involvement in Vietnam. The nation's boxing authorities, which may be a contradiction in terms, raced to strip Ali of his license and thus his livelihood. So much for innocent until proven guilty. For three-plus years, Ali was out of boxing. He finally found a back door to fight again. Then he won his case at the Supreme Court - not on principles, strictly speaking, but more on a technicality just to get the matter out of the way. Thus freed in a figurative sense, Ali took part in some classic bouts.

Eig had experts watch the films of Ali's matches, and them apply modern statistical methods to them. Therefore we know now that the early Ali hardly could be touched by another fighter, let alone hurt. But the later version had lost that skill, and dropped him a few ranks. He found out the hard way that he could take a punch, and he took a lot of them in bouts against Joe Frazier and George Foreman. And Ali went on far too long, when evidence of brain injuries were become more apparent by the week. But, as someone said, it's hard to turn down easy money, and few could go through money faster than Ali. If he wasn't spending lavishly or handing it out to ex-wives and child support, he was signing up for every get-rich-quick scheme in sight. Ali finally retired in 1981, and was essentially silenced by Parkinson's Syndrome some years later.

If you didn't live through all of this, the material will be new and interesting. But Eig apparently talked to as many people as possible along the way, and it is striking just how honest they all were. Let's just say Ali had an odd way of preparing for his first fight with Ken Norton, which resulted in a stunning loss. But there are good memories too - tales of Ali going well out of his way to help the poor and helpless, or brightening the lives of all who encountered him - and there must have been millions. He even went on diplomatic missions for the country that had tried to arrest a couple of decades before.

It might be worth noting that there are plenty of books on Ali in the Muhammad Ali Center in Louisville, Kentucky, but this isn't one of them. Maybe it didn't fit the idealized picture that, to at least some extent, the Center tries to paint. (Note: It's still a wonderful museum, and doesn't completely shy away from controversy.) Still, this is as full a biography as we probably will ever see on Ali, and it's absolutely worth your time.

Be notified of new posts on this site via Twitter @WDX2BB.
Posted by Budd Bailey at 5:03 PM