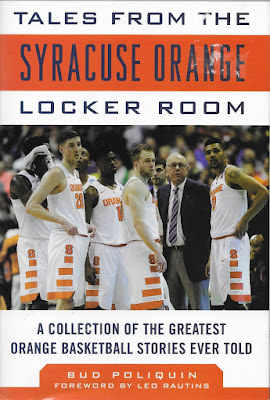 This is the type of book that, when spotted in the bargain section, makes a person wonder.

"The book looks familiar, but the cover looks new. Did I read this before?"

In this case, those who qualify as a major fan of the Syracuse basketball team indeed have read most of this book before. In fact, that person had two other chances to do so.

Syracuse sports journalist Bud Poliquin put together a tribute to the SU basketball program after the team won the national championship in 2004. Then when the team reached the Final Four in 2013, it was time for an update - this time with a different title.

OK, the Orange did it again in 2016, and Poliquin struck again with "Tales from the Syracuse Orange Locker Room." The title is the same this time around.

It's a rather typical book of its type. There are bite-sized chapters (two to five pages, more or less) on some of the key figures and events in Syracuse basketball history. Standing above it all is Jim Boeheim, who first arrived on campus in the fall of 1962 and who has been part of the coaching staff for close to 50 years. The national championship of 2003 receives the most attention, as well it should.

It's also fair to say that the book accentuates the positive. For example, the stories involving Fab Melo and Bernie Fine that did damage to the program receive very little coverage here. For the most part, the tales are generally upbeat and will put a smile on the face of Syracuse boosters.

On the other hand, someone really should have gone through the book and given it a full update in terms of the timeline. It's really odd to read about a three-overtime game in 1981 that is called the longest playoff game in Big East history - which was topped about a quarter-century later by the fabled Syracuse-Connecticut six-overtime thrilled. (By the way, it's odd that this classic contest goes untouched here.) Meanwhile, one has to guess how old the subject of a story might be, since there's no way of knowing if the age has been updated or not.

For those who haven't read the previous editions of "Tales from the Syracuse Orange Locker Room," this will present some good anecdotes from the team's long history. It will take you only a couple of hours to zip through this. But for those who have read the earlier versions, well, it might be best to leave it in the pile.

Be notified of new posts on this site via Twitter @WDX2BB.
Posted by Budd Bailey at 11:54 AM