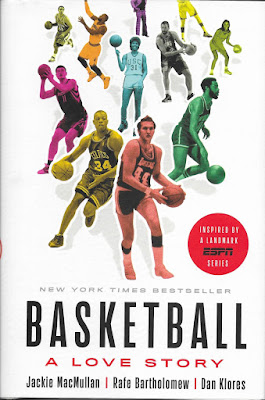 It's not the usual procedure, but sometimes the movie gets a head start on the book.

That's the case with "Basketball: A Love Story," which fans whose memories go back beyond Stephan Curry will thoroughly enjoy.

ESPN put together something of an oral history of basketball for this project. It grabbed all sorts of interviews from people involved in the game over the years.

At some point, it was decided that there was enough material there for a book, and then some. So Jackie MacMullan and Rafe Bartholomew, two first-rate writers, came on board to help put together a printed version.

You may have seen parts of the documentary over the past few months. It has popped up on television at odd times, with a ton of fresh interviews on a variety of subjects. The filmmaker, Dan Klores, obviously was given the time and space to do everything right.

The first point to know is that the book doesn't go all the way back to the beginning of the NBA, which dates back to just after the completion of World War II. The book is arranged by topics, and the first areas of discussion are the Celtics dynasty (1957-69) and the UCLA run (1964-75), the civil rights era of the Sixties, and the gambling scandal of the early 1960s.

And away we go from there. There are topics that obviously were converted into parts of the documentary and are therefore more complete - Olympic play, North Carolina, New York City ball, the ABA, Michael Jordan, UConn vs. Tennessee, and international play.

It's the voices along the way that you'll remember, though. Time has allowed many of the participants in the game to ability to give a very honest account. Here's Elvin Hayes on the time that his Houston team beat UCLA in the Astrodome - a game that really put college basketball on the map:

"(Lew Alcindor, later Kareem Abdul-Jabbar) was all-everything, and I wanted to take his star down and put mine up there. ... Before that, we were friends, but after that Houston game, we never talked again. We could play on teh same All-Star team and never talk to each other."

Or UConn women's coach Gino Auriemma on Pat Summitt of Tennessee: "What the outside world wanted us to do was compete like that and then go to dinner and have a great time. I'm saying, 'Where does that happen? What part of the world, in any sporting endeavor, when you've got two fierce rivals like this, do they really enjoy each other's company?'"

How about Kenny Smith on Shaq and Kobe? "These guys are like Felix Unger and Oscar Madison, but they live in the same house, so they just gotta learn to get along. ... They could have done a better job at it, honestly."

The group also interviewed some media types to provide some perspective along the way. Most of the time, this works well. Who wouldn't want to hear what Bob Ryan has to say about a particular area?

But it's the players and coaches who really shine here. Their first-person accounts are frequently fascinating, and they make "Basketball: A Love Story" a fascinating read for anyone who loves basketball and its rich history.

Be notified of new posts on this site via Twitter @WDX2BB.
Posted by Budd Bailey at 9:41 AM