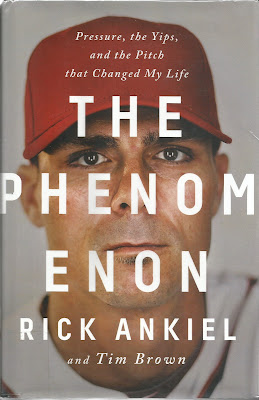 By Rick Ankiel and Tim Brown

Rick Ankiel had a gift, one that he came to use in a path toward a better life. And then that gift left, in a sense, never to return.

That's the Rick Ankiel story in two sentences. Naturally, there's a lot more to the story, but it's something of a starting point for his autobiography, "The Phenomenon."

The gift resided in his left arm. He could throw a baseball hard and accurately. The gift made sure that Ankiel attracted attention from professional baseball scouts, who eventually would come along with seven-figure contracts from him. It was also a ticket out of where his life was headed.

Ankiel was born out of wedlock, and his father sounds like he'd be a first-round draft pick of people you wouldn't want to have as a parent. The father dropped in occasionally to see his kids, delivering all kinds of abuse on to the kids and mother whenever he had the chance. Then he went back to his life with another family when he wasn't dodging the authorities for illegal activities. The surprise, I guess, isn't that Rick's brother wound up in jail. It's that Rick avoided that fate.

He signed a $2.5 million contract, sailed through the minors with the St. Louis Cardinals, apparently landed in St. Louis for good in 2000, and was the starting pitcher for the team in a playoff game.

Then the wheels fell off, and the story becomes much more uncommon and interesting.

What's it like to forget how to throw a strike in front of a sellout crowd and a national television audience? Ankiel is about the only person who knows. All of a sudden, he couldn't throw a pitch within range of the catcher's glove, let alone the strike zone. Ankiel made a quick exit from that particular postseason game, and discovered the gift had gone away because something inside had gone very wrong.

It's called "the yips," mostly in golf, when you just can't pull the putter back and make it follow orders to develop a smooth stroke to put the ball in the hole. Others call it "the Thing" or "the Monster." The most famous case of it happened to 1979 World Series hero Steve Blass, who shortly after that magical moment caught the bug. Naturally, the malfunction is called "Steve Blass Disease." No one knows what causes it, or how to cure it. It comes, and usually stays.

I saw something like that happen in the minor leagues one time. Darrell Miller was a Double-A catcher who simply couldn't throw the ball back to the pitcher after each pitch. Oddly, Miller had no trouble throwing to second on a stolen base attempt. It was incomprehensible at the time and painful to watch. By the way, Miller made it to the majors for a few years, and played about half of his games as a catcher. Maybe he found a way to cope with it.

It's easy to feel the emotion involved from Ankiel, who was on the verge of having it all - only to have it snatched away without any notice. He tried everything. Ankiel talked to coaches, teammates, fellow victims, and psychologists. He stopped throwing for a while, and threw constantly. Ankiel tried alcohol, drugs, etc. - even pitching in a game with shots of vodka in his system. Nothing helped.

Finally, Ankiel made it back to St. Louis at the end of the 2004 season, and retired the next spring - only to come back the next day as an outfielder. Yup, an outfielder. And by 2007, he was back in a Cardinals' uniform. In his first game as a starter, Ankiel hits a storybook home run late in the game - which is where the movie version of this book no doubt will end.

It took a while for Ankiel and co-author Tim Brown to find a rhythm in their writing. Sometimes the sentences go on too long, featuring 20 words when 10 would have gotten the point across. In addition, there are stretches of the story that hardly receive any words at all, such as the climb up the ladder to reach the majors the second time. It feels in those spots like someone put space limitations on the story, and something had to go.

On the other hand, Ankiel fully explores one of those issues that is never discussed much in the macho world of pro sports. We're not supposed to talk about something connected to mental health there, and the permanence of the ailment's sentence would scare anyone.

It couldn't have been easy to go over this subject all over again, so Ankiel deserves credit for writing about it in "The Phenomenon." Maybe people will be a bit more understanding the next time someone can't find the strike zone, and that's a step forward.

Be notified of new posts on this site via Twitter @WDX2BB.
Posted by Budd Bailey at 2:03 PM