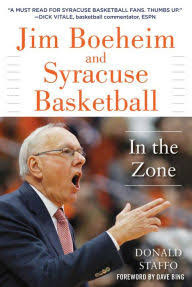 Is there anyone who thinks that Jim Boeheim needs to be defended for his record as a basketball coach over the years?

It seems there's at least one person who thinks that way.

Donald Staffo has written a book called "Jim Boeheim and Syracuse Basketball." Let's start with the fact that Boeheim, his family and friends might find this a generally enjoyable review of his basketball career. As for the rest of us, even those of us who are graduates of Syracuse University (guilty), this doesn't work so well.

Boeheim and Syracuse University have been connected for a long, long time. After all, he first came to the school as a freshman in 1962, and never really left. Boeheim played with the legendary Dave Bing as Syracuse had some rare great moments (it was mostly a football school before that) during their time there.

While Bing went on to a great pro career, Boeheim came back to Syracuse and worked his way up to status as an assistant coach. Then in 1976, Roy Danforth left Syracuse to go to Tulane (think about that one in today's context), and Boeheim took over as coach. He's been there ever since, constantly winning bunches of games with teams that sold thousands and thousands of tickets with its entertaining style.

Staffo spends a little time reviewing Boeheim's childhood and those early years at SU. Eventually, though, it's time to go through the seasons, year by year. That's not an easy chore, since there have been a lot of them. It's at least the starting point for the book, as it will be fun for Syracuse fans to see names they haven't contemplated in years. As you'd expect, the great seasons get covered better than the good ones, although it might have been nice to have more than a paragraph or two on at least every single season.

But more simply, this book takes an approach that is a little puzzling. Admittedly, Boeheim has some problems to overcome over the years. Syracuse has been on probation during his tenure a couple of times, and there was also the scandal involving his longtime assistant coach, Bernie Fine. Many college programs have gone under scrutiny for one reason or another, in part because the various rules of the NCAA are hard to follow. The program gets off a little easily here. Boeheim also has had a few odd public moments, which have gotten in the way of showing off the rest (and majority) of his personality. That has made him a little unpopular to some who are a distance away. Still, he knows basketball inside and out and can be quite funny in his own way, which makes him a great interview on general hoop subjects during basketball season.

In the meantime, Boeheim and the Orange usually have won, year after year. He's up with the all-time greats in a number of statistical categories. Boeheim has won a national championship, made some other Final Fours played in many NCAA Tournaments, and produced players that went on to the professional ranks. It's not quite Duke, but it's pretty close.

Still, the tone of the book is frequently defensive. Almost any criticism of Boeheim is mentioned here and then swatted away. Syracuse has been knocked for rarely leaving the Carrier Dome or at least New York State before January 1. Statto correctly points out that most of the "big name" schools do the same thing. But do we really need to go through the schedules of those schools, one by one, to back that up? The effect is rather numbing, since the point has been made.

In addition, much of the criticism concerning Boeheim in Syracuse basketball printed here comes from authorities like social media members. It gives the impression that talk show callers would have had their points reprinted here if the author had access to old tapes. Does anyone really care about someone who doesn't know that much but who believes Boeheim can't recruit? Or coach with the best? I'm in agreement with Staffo when he argues that Boeheim shouldn't have lost career coaching wins as a penalty for NCAA violations. Heck, someone coached those games. It does make writing about milestones in Boeheim's career a little awkward. But really, make the point and move on. More editing would have been really nice.

Speaking of editing, here's a minor point but worth noting. The way this is broken up by chapters is extremely odd. For example, the 1986-87 begins on page 92 at the end of Chapter 5. The National Championship game from that season starts at Chapter 6 on page 94, and the 1987-88 campaign's story begins on page 98. Wouldn't you want everything about that great season to be in the same chapter - and while we're at it, be a lot longer? The 1996 season is split up the same way. Near the end, Chapter 17 is entitled "The 2-3 Zone," but has a section on recruiting - and not about getting players who fit the system. It's a difficult book to read in some ways.

If you aren't sure where Staffo stands on all of this, at the end of the book he takes the lyrics to the song "My Way" and adapts them to fit Boeheim's career. Whew.

There's a better book out there on this subject: Boeheim's autobiography, "Bleeding Orange." He opened up quite a bit there, and it's a fun read. "Jim Boeheim and Syracuse Basketball," meanwhile, probably will leave all but extremely partisan fans on the disappointed side when they finish it.

Be notified of new posts on this site via Twitter @WDX2BB.
Posted by Budd Bailey at 10:03 PM