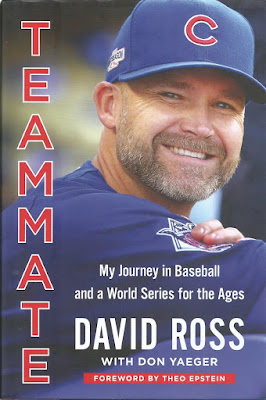 By David Ross with Don Yaeger

David Ross is the member of a very small club. After all, how many people are associated with World Series winners for both the Chicago Cubs and Boston Red Sox?

I couldn't easily find someone who played for the Cubs in 1908 and then went on to postseason glory with the Red Sox in the 1910s. However, Ross joined Jon Lester, John Lackey and front office executives Theo Epstein and Jed Hoyer as the obvious connections between those two long-suffering teams.

While Ross might not have been the best player of that group, he might have been the best story of the five at the time. (Epstein, of course, will be able to write a fascinating book about his baseball life whenever he's ready to do so.) Ross meanwhile had announced he was going to retire after the 2016 season.  That happened to coincide with the end of a 108-year drought for the Cubs when it came to championships, and Ross - at 39 - became something of a symbol of that win. No wonder he was and is so beloved by Cubs Nation. Ross was the one that landed a spot on "Dancing with the Stars" after retirement, and the one that authored the inevitable book deal that follows championships in big cities.

"Teammate" is that book. Whether it's worth your time or not is another story, and probably depends on your level of interest in the Cubs.

Until this burst of stardom at the end of his career, Ross had a rather typical career as a backup catcher in the big leagues. Ross broke into the majors with the Dodgers in 2002, and moved on to the Pirates and Padres before joining the Reds in 2006 and 2007. There he had his most productive seasons, playing in more than 100 games in a season for the only time in his career and smacking a career-high 21 homers in 2006. Then it was on to Boston, Atlanta and Boston again (including the title season of 2013) before coming to the Cubs in 2015.

Actually, Ross worked out the book deal before the 2016 season, so good fortune smiled on him in that sense as the season worked out perfectly. The idea was that Ross would discuss the subject of what goes into a good teammate, a reputation that he picked up in the last half of his career. Is there a good book in just that? That is a tough call, but we won't know just by reading this.

Ross points out that he tried to pass information along to teammates, come prepared and energized every day, and lay down the law in the clubhouse when it was necessary. At the end, Ross brings up words that go into being a good teammate: humility, honesty, reliability, communication, problem solving, sacrifice, dealing with change, engagement, positivity, accountability, trust, toughness and fun. It sort of feels like one of those leadership books that some business types swear by but leave the rest of us a little cold.

Ross uses his personal experiences on the day of the seventh game of the World Series as something of a framework for the book. It's a launching point for memories of his career. Those trips backwards into time are somewhat but not necessarily in chronological order. That gives the book a somewhat jumpy feel. Adding to that is that fact that Ross often jotted down a paragraph into his phone during the course of the 2016 season, and those "diary entries" are reprinted throughout the book. But they come off as completely isolated from anything else in the text, and often are at the level of "can't wait to see my family!" It's hard to understand the point of including them.

There are some good sections about the book, as you'd expect from an obviously thoughtful guy like this. What is a player thinking during a Game Seven? Here's Ross's viewpoint. He went from sub to player - making a couple of misplays that cost his team runs to hitting a home run - to bench-warmer, all in the same game. But he had a great seat to watch the Cubs win it all. Soon "Grandpa Rossy" would be the one that's carried off the field a champion by his teammates.

The reviews of "Teammate" on Amazon.com are very, very positive. All sports fans know the feeling when their favorite team wins it all - you can't wait to take in more about the experience. That enthusiasm shows up in the reviews. If you qualify, by all means pick this up. Those who have a few more degrees of separation, though, probably won't feel so warmly about the book. Those baseball fans would be better served reading "The Cubs Way," Tom Verducci's outstanding look about the Cubs' rise to a championship.

Be notified of new posts on this site via Twitter @WDX2BB.
Posted by Budd Bailey at 1:16 PM