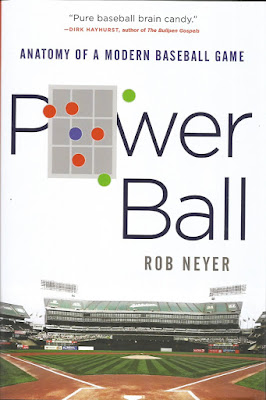 How to describe "Power Ball" by Rob Neyer in a paragraph? Hmm. That's a tough one.

Let's try this approach. You are attending a September 2017 game in Oakland between the Athletics and Houston Astros. Although most of the seats are empty, good fortune has placed a genuine, noted baseball writer in the seat next to you. Even if you are a good-sized fan of the game of baseball, you are smart enough to know that the person beside you knows more about what's going on than you do. So you do the prudent thing, and listen. For nine innings.

Daniel Okrent did something like this in terms of analysis of one game about 25 years ago in a book called "Nine Innings." This is a similar concept, as Neyer is quick to point out as he bows to Okrent and other authors. Still, it's different.

"Power Ball" is more like listening to a jazz concert, in which you're never quite sure where the music is headed - but you'll probably enjoy the ride. The game itself is something of a launching point for discussions, but it's not as if we need to hang on every pitch. Neyer doesn't It's a good enough game to hold your interest, but the drama isn't overwhelming the situation. And we know the Astros are going to go on and win the World Series in a few weeks, and this wasn't a key moment in their climb to greatness.

What subjects, then, come up? All sorts of them. For example, baseball has plenty of homers and strikeouts these days, but whether that's making for a better product from a fan viewpoint is tougher to say. It's easy to put the subjects up here in the form of questions, even if the author sort of fades in and out of such tangents. What are shifts doing to the sport? Is tanking a good idea? Where has the complete game gone? What has the increased use of relief pitchers done to the way the game is approached on the field? Where have all the African Americans gone?

Neyer has the advantage of looking at the game in hindsight, so that he can add some statistical analysis as he goes along. This includes how fast the ball is thrown, how fast it leaves the bat, a team's chances of winning the game, at a given moment, etc. There are a few quotes from the participants taken after the game, but not too many.

The best paragraph in the book might be the last. Baseball has evolved in the past several years, and not necessarily for the better. The games are rather slowly paced for a variety of reasons - pitching changes, timeouts, etc. There are more strikeouts and home runs, which little of the athletic excitement that the sport can provide (think triples or acrobatic double plays). Neyer says everyone is not too concerned because money is still coming in. However, rules always have been changed in sports depending on the circumstances, and the game has some problems that could use experiments in order to find answers. Maybe it's time to limit mound conferences or pitching changes or the strike zone. There's nothing too sacred about the rules, as they've been changed countless time over the years in order to keep the sport in balance. Besides, the bases are likely to stay 90 feet apart. Maybe, the author argues, that someone in power needs to look at what's best for the game rather than for what's best for the owners and players.

There is plenty to like here, and there should be few complaints about the content. I did find myself wondering if there would be those who didn't take to it because it wasn't exactly linear in its organization. Based on the comments of those who reviewed it on Amazon.com, that doesn't seem to be a problem for most.

"Power Ball" probably isn't for everyone, particularly if baseball isn't your major passion as a fan. If the description finds your sweet spot, though, it will definitely be worth your time to give it a read.

Be notified of new posts on this site via Twitter @WDX2BB.
Posted by Budd Bailey at 4:59 PM