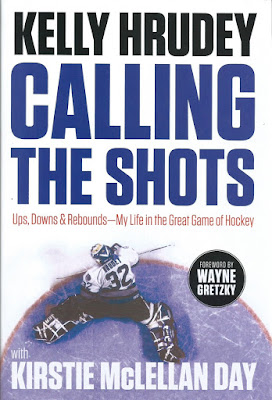 As autobiographies go, Kelly Hrudey's "Calling the Shots" is an odd one. It seems to have something missing - about 19 years of his life.

In other words, it stops when his playing career stopped - back in 1998. Very little is said about life after that, except in passing. Yet, Hrudey has been involved non-stop in hockey during those 19 years. He's served as a commentator on "Hockey Night in Canada."

On one hand, Hrudey seems like a rather unconventional choice to have a book published. He broke in with the New York Islanders right at the end of their dynasty in the early 1980s. Hrudey got to know some of the personalities from those teams that won four straight Stanley Cups, such as Al Arbour, Bryan Trottier, Mike Bossy, and the Sutters. The netminder was on some decent Islander teams after that, but they never were contenders for a title then.

From there Hrudey was dealt to the Kings, where he had the chance to play with Wayne Gretzky. Los Angeles had one good chance at the Cup during the goalie's time there, falling just short in a memorable series with the Canadiens in 1993. Hrudey finished 15 years in the NHL in San Jose in 1998.

So we've got a good hockey player who spent his entire big-league career in the United States. After retirement, he immediately launches a career in broadcasting in Canada, and he's been good at it ever since. Hrudey is smart and articulate, and offers good opinions on the games and the game. At this point, though, he's north of the border, and it's easy to wonder if fans in the United States will still be interested in his story. Could it have been written sooner? Probably.

The story that has been put on paper isn't a bad one though. Hrudey is honest and interesting throughout the book. He has nice things to say about almost all of his teammates, and doesn't hesitate to criticize some of his coaches when he thinks it is justified. Hrudey sometimes made such criticisms in public at the time, so it's no big surprise that he's not pulling any punches here.

This also offers a look at the mind of a goalie. The position lends itself to unusual thinkers. After all, how would you like it if a red light came on and thousands cheered every time you made a mistake on the job? No wonder Hrudey had some confidence problems along the way that led to something close to depression at times; I would bet most goalies have similar stories.

The pages go by pretty quickly, and it's a pleasant but not overly dramatic read. "Calling the Shots," therefore, is a difficult book to review. The cliche that "hockey fans ought to like it" is true, especially if they followed Hrudey's career in the United States. A more timely book on his days in broadcasting might prove to be an even better story, whenever it comes out.

Be notified of new posts on this site via Twitter @WDX2BB.
Posted by Budd Bailey at 12:45 PM