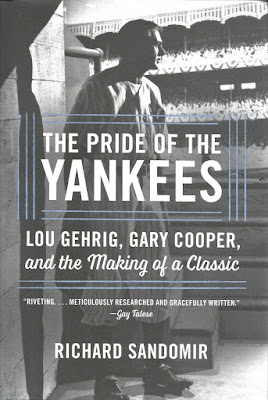 The first question you might have about the book, "The Pride of the Yankees," is a simple one.

Is this a book about movies, or is it about baseball?

To be fair, it's probably more about the movie on the life of Lou Gehrig that came out in 1942. But, there's certainly baseball involved in it, and I would bet that most baseball fans who have been around for a while probably seen it at least once - and maybe more. Even Red Sox fans feel like the room is getting a little dusty when they watch Gehrig's character say, "Today I consider myself the luckiest man on the face of the earth."

Therefore, I think it's of interest to sports fans and gets included on this site.

Most baseball fans like to watch movies about their favorite sports. You can start a good-sized debate about the merits of such films as "Bull Durham," "Field of Dreams," and "The Natural."

"Pride of the Yankees" is considered a very good movie. But, baseball fans, consider this fact: there is very little baseball in it. A few scenes contain action shots, but probably it's a smaller number than you think it is.

This keys in on the love story between Lou and Eleanor Gehrig, nicely cast with Gary Cooper and Teresa Wright in the starring roles. Cooper made a career in Hollywood out of playing strong, silent types, and Gehrig is a good fit here. That's a key point made by author Richard Sandomir, who reviews the film's history from start to finish here.

Cooper was an obvious choice for the role, according to everyone involved. That's in spite of the fact that not only did he have absolutely no baseball experience, but he was right-handed. That's a problem when you are trying to portray a left-handed first baseman. Cooper took six weeks of instruction from Lefty O'Doul, but that didn't replace a lifetime of interest in the game. So the baseball shots of Cooper are kept to a bare minimum. He's shown in some long shots, but major league Babe Herman was the one who was actually shown in such moments. A few other small portions of the film probably featured flipped negatives, so that the right-handed Cooper comes off as a lefty. Accounts differ on exactly how often that technique was used.

There is plenty of good background on all of the major players in the film. That starts at the top with Sam Goldwyn, the studio executive who knew nothing about baseball but knew a good story when he saw one. There are biographies of the stars and co-stars, and Eleanor Gehrig's role in the production is examined closely as well. There's also some digging into Lou's life; it seems that the relationship between Gehrig's wife and parents didn't have the Hollywood ending that was needed, so it was changed a bit.

Sandomir does his best work, though, with some research into the story. Movie scripts go through all sorts of changes before reaching the screen. The author was lucky enough to get a copy of the original script here, and had notes on how it was altered, and not altered, along the way. It's a fun look at the creative process in action.

Sandomir also uncovers a few facts in the film that don't quite match up with reality. They aren't major flaws, unless you are one of those baseball fans that insists that everything in a movie is historically accurate.

There's one necessary suggestion when it comes to reading the book. Go watch the movie. If you haven't seen it lately, go watch it again. Those who don't have it memorized at this point will enjoy the book much more if the scenes are fresh. Sandomir makes the point that the chemistry between Cooper and Wright really makes the movie work. They are totally believable as a happy couple, and it's easy for the audience to get swept along in their story.

Those who have no interest in the story obviously don't need to pick this up. But others will want to know more about "the making of ...", and this should work quite nicely for them. "The Pride of the Yankees" is a quick, interesting read about a film that will be watched for years to come, and deserves some applause of its own.

Be notified of new posts on this site via Twitter @WDX2BB.
Posted by Budd Bailey at 8:59 AM