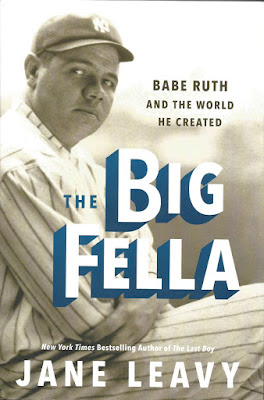 Think there's nothing more to be said at this point about the life and times of Babe Ruth?

Jane Leavy has come up with a slightly unconventional look at the Babe in her book, "The Big Fella." It took more than a decade to write, and her attention to detail shows up on every page.

Obviously, if you don't know at least the basics of the life of Babe Ruth, you probably have stumbled on this website by accident. He was the first and might be the biggest star ever created in baseball and maybe in all of sports - someone who could attract a crowd simply by walking down the street. America could not get enough of him - to be fair, the reverse was also true.

Ruth was a man of large appetites, naturally. He ate big, lived big, partied big, spent big, swung big and hit big - daring to break conventional wisdom that said baseball should be played one base at a time. His 714 career home runs not only shattered every record in the category at the time, but represented a huge leap in imagination in what was possible on the baseball field.

Ruth benefited from a friendly media during his time, hoping to ride the slugger's coattails to fame and fortune. Most of the early writing about Babe was positive if not embellished to make him look better than he was. That changed starting in the early 1970s with Robert Creamer's classic biography. Others have followed; Leigh Montville, for example, was much more willing to tell the stories that his predecessors in biography shied away from writing.

That brings us to Leavy, the author who wrote acclaimed biographies of Sandy Koufax and Mickey Mantle (the later is one of the best baseball biographies I've ever read). She soon realized that she needed to approach Ruth's story differently. Think of this as a clothesline. Each clothespin represents a stop on a tour that Ruth and Lou Gehrig took across the country after the 1927 World Series - a way to cash in on their fame. But hanging from the clothespin is a thorough and often fascinating look at some aspect of Ruth's life.

Need examples? Start with the Babe's childhood. Leavy found out in passing while interviewing a family member that his parents were divorced. Not many couples did that more than 100 years ago, and offers some insight into Ruth's future actions. She also talks about St. Mary's, the Baltimore boys home for troubled boys that was Babe's residence for most of his childhood. No, it wasn't an orphanage, a legend that keeps getting repeated.

Then there's his family life, which was as best complicated. Ruth's appetites extended to the fairer sex, as the old cliche goes, and he left his first wife for another woman. But the story is complicated by a long separation and by Ruth's continued determination not to take any of his wedding vows too seriously. Speaking of complicated, first wife Helen died in a house fire after splitting with Babe under odd circumstances.

A primary source of material for the book comes from Christy Walsh, the promoter of the cross-country tour and something of an agent/manager for Ruth during his glory days. He left a treasure trove of material behind about his dealings with Ruth. Mix that in with financial records from the Yankees saved from destruction in the 1970s and now safely placed in the Hall of Fame, and Leavy offers a good and previously unknown look at the Babe's finances. It's easy to conclude that Babe was in good hands with Walsh, as the agent made a lot of money for him and made sure he'd be relatively comfortable for the rest of his life through a trust fund.

A great many tiny pieces of information went into the book, no doubt painstakingly accumulated. All of this is helped by modern technology. Records buried in files for years are now available on the internet. Therefore, it only took a few mouse clicks for Leavy to discover Babe's parents were divorced. Creamer, who didn't know that fact, would have had to gone through every Baltimore newspaper in that era by hand to make the same discovery. She also talked to a variety of people, including plenty of grandchildren. It seems that an encounter with Babe Ruth was something that needed to be part of the family heritage, and thus was passed down.

Those who are looking for the basics on the life of Ruth should look elsewhere. "The Big Fella" is more of a second read on the subject, who remains part of the national conversation when it comes to baseball and sports stars in general. Those who can pick it up and read it - it checks in 620 pages including notes, etc. - will find it to be very worthwhile.