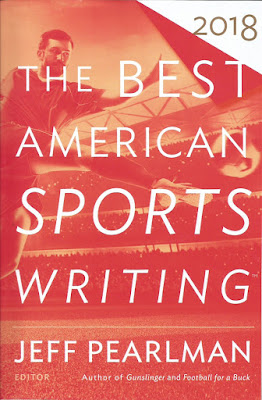 I've been reviewing books in this series for several years, and reading them since its inception in 1991. They've all been good; I think there was only one that received less than a four-star rating.

It's with a little surprise, then, that I can say this offering of "The Best American Sports Writing" might be the one of the best of the entire bunch. I don't have the other 27 copies handy, but I feel rather confident in going that far.

That's because of the story selection. Jeff Pearlman is this year's editor, and he has selected stories that make a strong impact. Let's make that word stand out a little bit - impact.

It would be easy to guess that all of the stories that reach the "finals" in terms of inclusion in the book are well done, year after year. Then it becomes a matter of individual taste as to which articles turn up in the book, and which ones are left to the honorable mention portion of the book. It's easy to guess that Pearlman did a particularly good job of finding stories that hit readers hard in many cases.

Muhammad Ali can still fascinate us, even in death, thanks to Tom Junod's moment-by-moment description of his death and the timeline to his burial. Speaking of funerals, there are a bunch of them in the story of a plane crash of a South American soccer team from Sam Borden. Football head injuries receive a young face from Reid Forgrave. Steve Friedman profiles a woman who just can't stop running - and there are many answers to the "from what?" that lurk at the end of that sentence. You've never heard of boxer Ed "Bad Boy" Brown, but you'll find it tough to forget his story. The list goes on from there. Some certainly will say the dramatic side of sports and life is over-represented here, but the stories must be considered well done.

Still, not every story is a gut-punch. Wright Thompson is a regular in the series, and his look at basketball legend Pat Riley as someone not quite in the winter of his life is detailed and fascinating. We know Dave Kindred can make the phone book interesting, but mix him with someone like Lefty Driesell - speaking of a lion in winter - is fun and poignant. And how about Cody Decker, one of those minor league baseball lifers who is still trying to crack the big leagues on the wrong side of 30?

The percentage of readable, interesting stories wasn't quite perfect. One of the few that didn't work for me was David Roth's attack on the National Football League, "Downward Spiral." There's an argument to be made there, but it should have been more clear and more simple. But in the very next story in the book, Tyler Tynes comes through with "There Is No Escape from Politics." There's just as much rage there, but the argument is better. Tynes forces you to at least listen, which is crucial.

Pearlman obviously is on something of a role this year. His book on the United States Football League was terrific, and now he's here with a connection to another bit of reading in "Best American Sports Writing 2018." Time to bet on the lottery, Jeff. Don't miss this frequently fascinating anthology.

Be notified of new posts on this site via Twitter @WDX2BB.
Posted by Budd Bailey at 3:34 PM