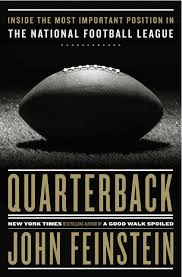 John Feinstein has hit the magic number of 40 when it comes to books. Even if you consider that some of them were for children, and thus required a little less effort, that's a lot of books.

The number could inspire a discussion about what sport he does best. My guess is that his two biggest loves - and thus his best efforts - are college basketball and golf. Feinstein got off to a flying start in the book business in the late 1980s with "A Season on the Brink." He spent a season with the legendary and fascinating Bobby Knight at Indiana. From there he has bounced around a bit in terms of sports, with stories about pro basketball, major and minor league baseball, and college football to his credit. With that sort of range, it's easy to conclude that Feinstein merely is in search of good stories from people who can tell them well - and consistently finds them.

"Quarterback" represents a relatively rare jump into pro football for Feinstein. He did spent a year with the NFL with "Next Man Up," which (as I recall) spent most of his time with the Baltimore Ravens. But this is more general, and it's still a pretty solid effort, as usual.

The NFL is, at its base, all about quarterbacks - the most important position in any team sports. If you don't have a good one, well, you can wave goodbye to a good chance at becoming a champion team. Yes, there are exceptions, but not many. An injury to a starter usually dooms a team to mediocrity or worse. The quarterbacks receive most of the publicity; casual fans who don't know more than one name on the Green Bay Packers can identify Aaron Rodgers easily.

Feinstein picked out five quarterbacks to follow during the course of the 2017 season. Alex Smith, a former No. 1 overall draft choice, was hoping to lead the Kansas City Chiefs to the Super Bowl in what figured to be his final year in Kansas City. Andrew Luck of the Colts  was hoping to put an injury-filled year behind him in 2017. Joe Flacco had become the face of the Ravens' franchise, even though he wasn't at the very top tier of players at the position. Ryan Fitzpatrick came out of Harvard merely looking for a chance to land on an NFL roster, and has thrown for more than 25,000 yards and earned more money than almost all of his college classmates. He had bounced from team to team before finally landing in Tampa last season. The final choice is an odd one - Doug Williams is a retired quarterback. He had his big moment when he passed the Redskins to a Super Bowl title; now he's trying to help Washington do that again in the team's front office.

The first part of the book is devoted to the back stories of the quarterbacks involved, and it's quite good. Feinstein always has been good about paying attention to detail, and it's on display here. All five players have stories to tell about their days in the game. Luck, for example, was a golden boy as a No. 1 pick out of Stanford, while Flacco came out of Delaware and Fitzpatrick was a seventh-round draft choice. They all have some things in common. The five of them realize that the quarterback gets too much of the credit when things go well for the team, and too much of the blame when things go badly. Oh, right - quarterbacks are usually in pain, even when they aren't injured.

The second portion of the book is devoted to the 2017 season. While the four playing QBs and the Redskins' quarterback situation receive the most attention, the whole league's season comes under scrutiny. That season is relatively fresh in some memories now, but others might think the story line jumps around too much and tries to cover a little too much territory.

Be prepared for a little analysis along the way too. Feinstein usually has felt free to express his own personal viewpoints along the way. For example, here he has a few opinions about Donald Trump's remarks about players who knelt during the National Anthem, which caused quite a stir. Feinstein wasn't happy about it. If you don't like a dash of politics mixed with your sports, then don't say you weren't warned. But it shouldn't bother most readers.

There isn't much controversy about what's said in here by the quarterbacks involved. The subjects, though, are generally insightful and interesting people. It's nice to spend a few hours with them all. "Quarterback" isn't Feinstein's best book - and I've read all of the ones for adults - but it's another worthwhile effort.

Learn more about this book

Be notified of new posts on this site via Twitter @WDX2BB.
Posted by Budd Bailey at 5:14 PM