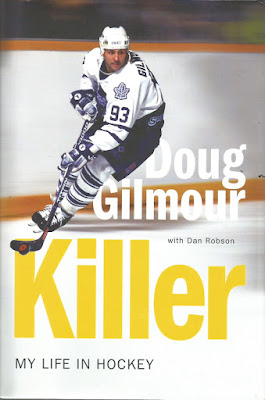 By Doug Gilmour with Dan Robson

The number of seventh-round draft choices who reached the Hockey Hall of Fame has to be a very small one. The number of 177-pounders who are enshrined in Toronto probably isn't too big either.

No doubt about it - Doug Gilmour beat the odds.

Gilmour was taken right after Jay Ness and just before Brad Ramsden in the 1982 Entry Draft. Gilmour went on to become the best player taken there, probably topping the careers of such players as Phil Housley and Dave Andreychuk. The forward finished with 1,414 points in 1,474 career games, which isn't bad at all for a guy who broke in as a fourth-line checking center.

That's a pretty good story, and he tells his side of it in the book, "Killer." Gilmour took his time with writing the story, since he retired in 2003. It's easy to wonder if he still needed a little more time to put things into more perspective.

Here's a quick refresher on his career. Gilmour grew up in Kingston, Ontario, in a sports-minded family. His brother was even a pro hockey player. Doug's youth is a rather standard story, a smallish player who had world-class stats in junior hockey. He had 119 points in 76 games at 18 years of age, and a ridiculous 177 points in 68 games at 19. And when he got to St. Louis, the Blues made him ... a checker. Well, maybe that's why the Blues have never won a Stanley Cup.

But eventually, Gilmour got his chance after three years of good two-way play, and he scored 105 points in 1986-87. A year later, the center was traded to Calgary, where he helped the Flames win a Stanley Cup in 1989. Then in 1992, Gilmore was part of a massive, five-for-five deal with the Maple Leafs ... and that's where the story really gets interesting.

After an initial half-season of adjustment, Gilmour burst out in 1992-93 - a season that is fondly remembered by Toronto's hockey fans. That was the season that the Leafs could have won the Cup, but Wayne Gretzky and the Kings got in the way in the conference finals. Still, Gilmour was idolized in Toronto, which as is written here has benefits and pressures magnified beyond what most could believe. I would bet that some would call Gilmour the greatest Maple Leaf ever, at least during the time from 1992-94.

From there, Gilmour did some bouncing from team to team - New Jersey, Chicago, Buffalo, and Montreal. By the time he passed through Buffalo (personal note: I covered the team in his time there), he seemed a little worn down by stardom. Gilmour returned to Toronto, hurt his knee badly in his first game there, and never played again.

In the book, Gilmour goes through the seasons, one after another, easily enough. There are some stories about some of the big goals and big games he had, and encounters with coaches and teammates along the way. It's all told in a rather dry manner. Gilmour does seem to come to life a bit when describing pranks and practical jokes played on teammates and others, although that sort of stuff may not strike everyone as particularly amusing.

Now, I know that there are thousands of people who still love Doug Gilmour and the way he played hockey. They no doubt rushed to the bookstore when this book was released, and zipped through the text with a smile on their faces - especially the parts of the 1993 team. That's fine. But it's easy to ask for something more in a book like this. There isn't too much about anyone else in his orbit, and Gilmour doesn't particularly come across as an introspective person.

Gilmour only devotes a couple of sentences to a well-publicized 1988 lawsuit. He simply says he faced some false legal accusations, which he said were rejected by a grand jury. Gilmour describes it as "the most difficult time in my life." It's obviously tough to know from a distance if there were legal or personal after-effects from that episode. But the incident apparently led to his trade from St. Louis to Calgary. Could he have said more here? Should he have said more, or even less? I'm not going to take sides without knowing the complete story, but it's a curious passage in the book.

"Killer" will tell you the story of a hockey player who seemed to be playing chess on the ice when everyone else was playing checkers. He deserves full credit for a great career. Some readers of Gilmour's autobiography, though, will come away seeking more.

Be notified of new posts on this site via Twitter @WDX2BB.
Posted by Budd Bailey at 5:01 PM