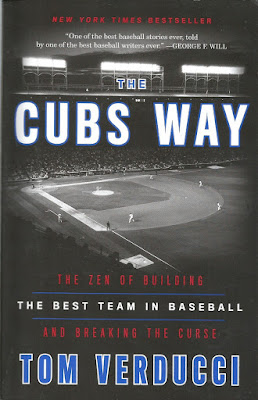 If you are a baseball fan, you might have heard that the Chicago Cubs' World Series win in 2016 was the team's first in more than a 100 years.

This had two obvious effects.

1. Cubs' fans, and there are bunches of them across the country, could no longer describe themselves as "long suffering."

2. The championship was sure to be followed by the publication of enough books to deforest large regions of the country.

Since I'm not a member of Cubs Nation, I chose to wait a while and try to pick up a copy of what figured to be the best book on the team's rise. After looking over the crop of publications the following spring, I knew that Tom Verducci's book would be the one to get at some point down the road.

Now that I've actually read it, I can safely say that "The Cubs' Way" was an absolutely perfect fit between subject and author.

Verducci is running out of mediums to conquer. He already covers major league baseball for Sports Illustrated, and is one of the best in the business there. Verducci does work for Fox Sports on baseball, and displays his insight nicely in that role. Here he is out with his second book. The first, which was done with Joe Torre, vaulted into best-seller land. This may not sell like that one, but it's an even more impressive effort.

This story more or less starts in the fall of 2011. That's when Theo Epstein, the "boy wonder" of the Boston Red Sox, decided he had become living under the microscope of running the Red Sox. He had already ended that team's curse - with plenty of help, of course - and the thought of doing it again in Chicago was appealing. So he jumped to the Cubs' presidency, surrounded himself with smart people, and went to work.

The Red Sox were almost a finished product when Epstein took the general manager's job in Boston; fixing the Cubs were a matter of starting from scratch. Epstein started by looking for building blocks that could be the foundation of a good team. He found them in the likes of Anthony Rizzo, Kris Bryant, Kyle Schwarber and Addison Russell. Verducci nicely reviews the histories of those players, who panned out as well as the team could have hoped and then some. The Cubs specialized in taking hitters in the draft in those earlier years of the rebuild, they added pitchers from any available source such as free agency and trades.

It took time for everything to come together. Hiring Joe Madden as a manager after the 2014 season was a big move, since he was well regarded as one of the best in the business at his profession. Chicago reached the playoffs in 2015, losing to the Mets in the NLCS. Many thought the Cubs were ready for the next step. As you know if you've gotten this far, they were. But it wasn't easy, as Chicago had to rally from a 3-1 deficit in the series and a blown lead late in Game Seven to win the Series. Epstein certainly is headed for the Hall of Fame now, and others probably will follow.

Verducci had a great story as a foundation for the book, which jumps back and forth from each game of the Series to the development process. Plenty of authors have that initial idea for a story. He lifts the book up a couple of notches with his own good work.

First, he had a good group of individuals as major sources. Madden is one of the most interesting people in the game, a manager who is always willing to look for new ways to bind his team together. I've heard people say this book could be placed in the management section of the bookstore, as Madden has many tips on such subjects as communication that would work with any business. Madden, Epstein and some players are good talkers, people who can provide information and perspective on the situation.

Then there's the research. The book is filled with little facts that draw the reader in along the way. For example, the Indians' last surviving player from their 1948 championship team was first baseman Eddie Robinson. He was 95 in 2016, and he played his first big league game against the Philadelphia A's in 1942. The opposing manager for the Athletics that day was Connie Mack - who was born in 1862 and managed Philadelphia for 50 years. The entire history of baseball (the first pro team was formed in 1869) is more or less covered in that item. Verducci also is a talented writer who isn't afraid to throw in a rhetorical flourish every now and again.

It took about two chapters to realize that "The Cubs" Way" was going to be special. The other 18 chapters were confirmation of that judgment. I can't imagine this subject being covered any better than it is here. Cubs Nation, if you haven't gotten around to this yet, go find it now.

Be notified of new posts on this site via Twitter @WDX2BB.
Posted by Budd Bailey at 4:10 PM