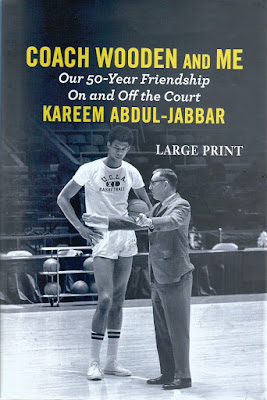 For those who don't know anything about basketball, the friendship between Kareem Abdul-Jabbar and John Wooden might seem a little odd.

Abdul-Jabbar is a tall, Muslim, African-American from New York City. Wooden was a normal-sized, Christian Caucasian from Indiana. The contrasts could go further, but you get the idea. Imagine the two of them in a booth in a diner, chatting away.

They did have basketball in common, of course. Wooden won 10 NCAA championships as a coach at UCLA and is considered one of the greatest coaches to ever put a whistle around his neck. He's also the first person to be inducted into the Basketball Hall of Fame as a player and coach. Abdul-Jabbar helped Wooden win three of those titles (1967-69), and went on to become one of the greatest players in history.

They also had something else in common: life. Their relationship showed an curiosity about life on both sides.

After Wooden died at the age of 99, it took Abdul-Jabbar years to put down on paper what Wooden meant to him. The result of that project, "Coach Wooden and Me," is a sweetheart of a book.

Abdul-Jabbar represents something of a turning point in the story of basketball. He was so tall (7-foot-2) and so good in high school that there was intense interest in where he would play in college. It could be argued that he started the growth of recruiting for college teams, something that has reached a mania in recent years. The young man quickly discovered that any university with a basketball program was willing to give him a full scholarship.

That's where Wooden enters the picture. Abdul-Jabbar, then known as Lew Alcindor, sat down with Wooden for their first meeting during the recruiting process. The author liked the idea of attending UCLA, with its good weather and history of attracting top blacks such as Jackie Robinson. Wooden started the conversation by talking about academics, which floored Abdul-Jabbar. Basketball entered the conversation much later. Clearly, this was a coach with more on his mind than basketball. What's more, it was the absolutely perfect approach for someone like Abdul-Jabbar, a thoughtful man just coming into his own when it came to developing a personal philosophy.

The two men worked well together on the court, of course. Wooden's philosophy was to prepare his teams to play their best, and winning would take care of itself if they played to their potential. They usually did. That was fine with Abdul-Jabbar, who was rather shy in some ways and had no personal need to set scoring records. The contrast there might be someone like Wilt Chamberlain, who was an entirely different personality.

Abdul-Jabbar moved on to the pros after graduation, and found that he kept thinking about Wooden's lessons as he went through life. They seemed to apply to more aspects of existence than just basketball. It's something that virtually all of Wooden's ex-players have said. The phrase "Be quick but don't hurry" can be applied to all sorts of activities.

Abdul-Jabbar eventually reached out to Wooden again, and the friendship between them grew. Sometimes they talked on the phone, sometimes they shared a meal together, sometimes they just watched a basketball or baseball game on television. The younger of the two soon realized that Wooden had become something of a father figure to him.

The author wisely has plenty of stories from those conversations, which proved educational. For example, Abdul-Jabbar never realized how much pressure Wooden faced during those UCLA years, especially when he had Abdul-Jabbar as his star center. The Bruins weren't just hoping to win titles then; they were expected to win them. Big difference. Wooden told Abdul-Jabbar once, "I wish all my really good friends in coaching would win one national championship. And those I don't think highly of, I wish they would win several."

This all sounds like it as a "Tuesdays with Morrie" approach to it, referring to the book by Mitch Albom. And it does, but the difference is that it's interesting to learn about Abdul-Jabbar as well. He had periods when he wasn't particularly open in his public statements - and who could blame him at times? - so we had to wait until now to learn what he was thinking during a basketball career that was played out in public.

"Coach Wooden and Me" goes by quickly; it can be read in a day if you have some time. But by all means, don't hurry. Sit back and enjoy a wonderful story about the relationship between the subject of the book and the author.

Be notified of new posts on this site on Twitter @WDX2BB.
Posted by Budd Bailey at 10:18 AM