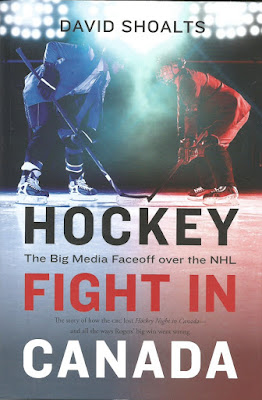 Even American hockey fans understand the tradition behind the long-running broadcast program, "Hockey Night in Canada." It started on radio with Foster Hewitt doing the play-by-play, and eventually moved on to television in the 1950s. The story was that all of Canada gathered around TV sets to watch a game, preferably near a potbellied stove. It was part of the country's heritage.

The television business changed, of course, since those days, but Hockey Night remained something of a cultural institution. Therefore it was something of a shock in 2013 when it was announced that the CBC was about to lose its role as producer of the NHL games - putting about 60 years in the trashcan. Rogers had won the rights to the games, and would be merely showing those games on the CBC outlet.

This all didn't make much sense from an American perspective, which has taken the fact that the CBC was the gold standard for hockey broadcasting for granted. (Considering the way techniques get passed along in the television business, it's fair to guess that the playing field has been leveled out.) What, then, did happen up in the Great White North?

The answer, naturally, is complicated, and, sure enough, it involves money. Billions of dollars are involved. Luckily, David Shoalts has come to the rescue with an explanation of it all in the book, "Hockey Fight in Canada."

The author takes us through the story about how the changing media landscape altered the way hockey is watched. Before the landmark deal in 2013, the NHL had sold pieces of its broadcast rights to various outlets. The CBC had a piece for Hockey Night (Saturdays and playoffs), Bell/TSN had pieces, and Rogers/Sportsnet had some too. But eventually, the NHL came up with the idea of selling everything at once - and then letting the bidding winner split up the pieces as it saw fit. Since the CBC was not involved in wireless technology or streaming, there was no way the government-supported company could win this battle.

Shoalts takes us through the various parts of the puzzle and introduces us to a variety of players. It's interesting to see how everything comes together, particularly in regard to the NHL and its negotiation strategy. Other sports in America still sell off pieces of the rights; it will be interesting to see if this approach is the wave of the future.

And Shoalts has a natural way to end the story. The new production team came up with new ways to tell stories and new personalities to present them. But within two years, the gimmicks were gone and an old face was back front and center of the broadcast. In other words, it looked like Hockey Night in Canada again. I think that's a happy ending.

A book like "Hockey Fight in Canada" obviously is going to have a relatively limited audience, particularly in the United States. It's a business book for starters, and that means some people are going to find it on the dry side. Readers in America also had better be big enough hockey fans to know at least some of the issues and personalities involved.

But Shoalts is up to the task of making this quite quick and painless when it comes to reading "Hockey Fight in Canada." It's a straight-forward story that's told as well as possible. If you are looking to sort things out in this area, this is an appropriate destination.

Be notified of new posts on this site via Twitter @WDX2BB.
Posted by Budd Bailey at 6:52 PM