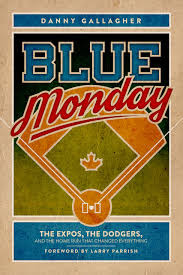 There's no rule that saying a major-league sports team has to win eventually. Chances only come up so often, and if the team doesn't capitalize on that window of opportunity - which usually only lasts a few years at most - they usually are doomed to wait much longer.

At least those teams finally got a chance. Others aren't so lucky. Exhibit A might be the baseball's Montreal Expos. Their best team probably was in 1994, when a labor stoppage forced the cancellation of the end of the season. That stopped Montreal's opportunity to claim a World Series crown, and perhaps led to the team's departure to Washington.

But their other big chance came on the field. And that's the one that author Danny Gallagher examines in his book "Blue Monday."

The Expos, who were born in 1969, needed about a decade to become competitive. Slowly but surely, they collected enough talent to be a title contender. There were three future Hall of Famers on that roster - Tim Raines, Gary Carter and Andre Dawson. After coming close to the postseason in 1979 and 1980, Montreal finally broke through in 1981. That was the year of another labor dispute and a split season that led to an extra round of the playoffs. The Expos knocked off the Phillies, three games to two, and met the Dodgers for the right to go to the World Series. What's more, after a pair of wins on each side, Game Five was in Montreal.

That deciding game was still tied in the ninth inning when manager Jim Fanning - brought on late in the regular season to replace Dick Williams - called on ace starter Steve Rogers to pitch. Rogers might have been the best pitcher in Expos history, but he will be remembered by some as the man who allowed a game-winning homer by Dodgers' outfielder Rick Monday. That was as close to a world championship as the Expos ever got, and it made Monday about as popular in Montreal as Bucky Dent was in Boston in late 1978.

Gallagher may not be the biggest single collector of information about the Expos alive, but he's certainly in the ballpark. The author has written four other books on the Expos after serving as a beat reporter for a Montreal newspaper at one point. No one can doubt his enthusiasm for this project. He talked to dozens and dozens of people who were involved in that game and team - virtually everyone who is alive, and in the case of the deceased Williams, his son.

Does all of this information work? That's more of a mixed bag. The book seems a bit padded by most standards. Play-by-play broadcasts are quoted for long stretches, and some of the players' quotes do tend to go on and on with some odd tangents. Some of the facts and anecdotes are repeated and not in any particular order. There are chapters about such players as Terry Francona, then just a young players with the Expos but someone who later made some baseball history by managing the Red Sox to a World Series title. Monday's baseball life story gets lots of room, although the Canadian target audience for a book like this probably is more interested in the effects of the loss on the team in the short term.

In addition, Gallagher comes off as a little too much of a fan of the Expos along the way here. A book like this is supposed to provide some dispassionate perspective on a turning point in franchise history, and it's a little surprising that the author approached it this way. Maybe he's trying to please his audience, which certainly mostly lives in Canada.

Moments like the Monday home run due come up frequently in baseball, which is what helps to make October so dramatic. Ask the Milwaukee Brewers, who a day before this was written looked poised to take a big lead in the NLCS. Alas, Justin Turner's homer may change the direction of the series for good. We'll see.

In the meantime, "Blue Monday" certainly will fill you in on the details of another one of those moments. It could have been better, but those still carrying the Expos' torch after all these years will find it interesting.

Be notified of new posts on this site via Twitter @WDX2BB.
Posted by Budd Bailey at 4:53 PM